The musical force behind the Prodigy sound is Liam Howlett, from Cressing in Esse, England. He writes, produces, mixes, performs and basically just does it all for the Prodigy. He was born in 1971 and he grew up together with his father and sister. He's a classically trained pianist and DJ. His father had made him take up classical piano lessons since the age of 13 (but he still can't read notes). Liam's fascination with music began during primary school, when he fell for Ska and Two Tone. On moving up to secondary school, he was immediately attracted to the hip-hop culture, became fascinated by bands like Grandmaster Flash & the Furiuos Five. His very first record was Ska's Greatest Hits, containing tracks from The Selector and The Specials. When he went to school he learnt break-dancing and danced a lot with his crew Pure City Breakers. 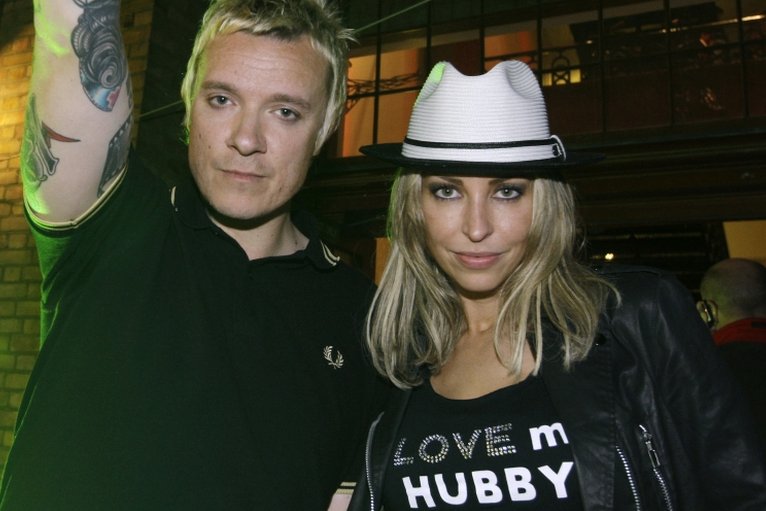 Natalie Appleton declares her love for husband Liam Howlett – on her T-shirt. The Couple were pictured at the Kerrang! Awards in London 2009.

Inevitably, Howlett wanted to perform his own material. A couple of years later, a holiday job on a building site earned him enough cash to buy two cheap turntables. Soon after, a local hip-hop band called Cut 2 Kill took him on board as their second DJ. From this he purchased a keyboard with the intention of making a few songs for fun. Cut To Kill signed to Tam Tam Records. But the deal excluded Liam, despite the fact that the band used one of his tracks to win the contract. This betrayal coincided with Liam's dwindling interest in hip-hop. Following an incident when a knife was pulled on him at London's Subterania because he "didn't fit in", he began to look for new musical pastures. It was the summer of 1988.

While Liam was immersed in hip-hop, his home country was on an altogether different trip - Acid House. While pure house music tempered it's rhythmic obsession by incorporating more melodies and harmonies, Acid House pursued rhythm to new extremes, using technology to create beats that could never be simulated by human beings. Originating in Chicago and Detroit, the music soon crossed the Atlantic, and took root via massive illegal warehouse parties that formed the foundation for what became known as rave. It was the era of the smart bars, the marathon dancing and a recycled hippy mantra - the second Summer Of Love had arrived.

Liam's first experience of rave culture was a party at the Barn in Rayne (home to the Shamen's Mr. C) in 1989, at the age of 17. He was immediately converted: "I thought it was the bollocks, such a different experience from what I had become used to. Hip-hop was such an exclusivist, pretentious scene, and to a certain extent, it always excluded white bands. Then to experience something like that first night at the Barn was such a stark contrast, I really loved the music and the whole vibe. I had never been into dancing that much, but it didn't matter, because you could enjoy it, you didn't have to dance properly". Within a couple of months, Liam had started DJ-ing at these parties and became a well known face on the Essex scene. However, he was still too shy to play any of the material he had secretly been writing.

On weekends, he went to all the raves and when the clubs closed down in the early morning those ravers went on to party on the beach while Liam played a compilation of the latest rave tracks out of a van. One day, Keith Flint approached him and asked whether Liam could do some mixtapes for him. When Liam had done the mixes he would pass it to Keith. One night, when Keith and Leeroy Thornhill were returning from a rave, they flipped Liam’s tape onto side B (which was titled "the prodigy" in reference to the Moog synthesizer used) to find some of Liam's own tracks on it and got completely hooked. They decided to approach Liam and ask him if he wanted to play on stage with Keith and Leeroy dancing at the front of the stage. Liam agreed, and The Prodigy was born.

The name of the band comes from the first synthesizer Liam purchased used in his early tracks. The synthesizer was called a the Moog Prodigy (Liam has said that's not the full story of it. He has also given some other reasons to choose that name but it's clear that he spotted it from that synth). Incidentally MOOG have now gone bust (more info can be found from equipment page).

The first demo that Liam produced featured tracks What Evil Lurks, We Gonna Rock, Android, Everybody In The Place, Charly (Original), Spacehopper, Come Correct, Demons, Drumscape. Liam Howlett signed to leading UK rave label XL Recordings on the strength of several tracks played to XL boss Nick Halkes and in 1991 the debut Prodigy single 'What Evil Lurks' was released. This included an early version of 'Everybody In The Place'. After this, came 'Charly' and the rest falls into place...

He has a very positive attitude, not really care what people say about his music and prefers if the band just remains to be called a dance group then anything else. Liam is known to be the most quiet one in the band. Except when he comes to interviews. He is always throwing in swear words somewhere. Especially when someone is complaining about his music. Nothing that anyone says will change the attitude.

Liam has towards his music and the way he makes it. He is the brain of the Prodigy. It's him who writes, produces and performs most of the music using various kinds of synthesizers. But don't be fooled by those saying he's the Prodigy - without the others, the whole Prodigy spirit would be nothing. He always works alone in his studio, he can write music only if he's on his own and no one else is around and he like to work at night (he usually starts at 10 in the evening). 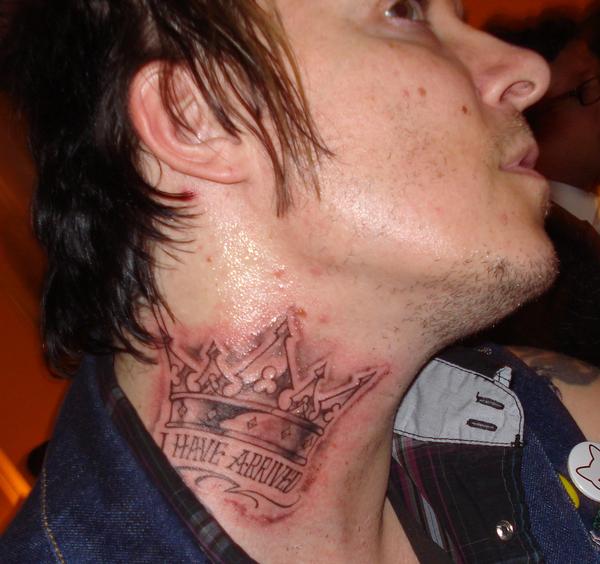 He lived in Braintree for a long time (until the age of 26), but then he moved out of there setting up his studio in the Essex countryside. He also built a brand new home studio The Dirtchamber when he moved there. His previous studio was called The Earthbound Studios. He also have a shared flat with Keith Flint near London clubland’s nerve centre of Hoxton Square.

He used to date a girl called Angela Potter for years. Her name has had mentioned in the press a few times. On 7 June 2002 he married All Saints' Natalie Appleton in a ceremony in France. The couple were romantically linked since 2000 summer, after they met at the V Festival. In January 2001, at the World Sports Awards, Natalie was spotted wearing a tee shirt with the legend: "I Love Liam.'' And finally in April 2001 the press reported that they are engaged to be married next year. Their son, Ace Billy, was born on 2 March 2004. He is also a stepfather of Rachel Appleton. Brother-in-law of Nicole Appleton, Liam Gallagher and Noel Gallagher from the Oasis.

He loves fast cars – among others, he had a Ford Cortina, a Mercedes Sport and an AC Cobra. His favorite car is the Ferrari F40. Maybe the most expensive car that he owns is a McLaren Mercedes F1 supercar, one of the 106 ever manufactured. He also used to clean cars with Empirion member Jamie at the garage of Jamie’s brother. They are still friends and frighten skiers on snowboarding trips.

He's a big fan of horror films. Many of his tracks contain samples from films such as "Poltergeist III" (Crazy Man) and "The Shining"(The Heat The Energy) (notice all samples that he has used, check the samples page). He has a strange collection of horror film memorabilia in his house, and even a 3' (90 cm.) green rat standing up in his sitting room!. And rumors tell at he even has a 6-foot sword hanging on the wall, and a full-size coffin (inspired by a scene in the film Poltergeist), which is actually his drink cabinet. He also has a gold fish Harry Potter. He is a scared of deep waters. He has stated that he's a good swimmer but there is something really terrifying about the deep seas.

His favorite band is Rage Against The Machine ("Any Rage Against The Machine album. They're my favorite band. " - ATN). Music he likes is like Tom Morello of RATM ("Liam is a big fan of Tom's guitar style and the noises that he comes up with" - NME), John Lydon ("I'm a fan of Lydon" - ATN), Renegade Soundwave, Meat Beat Manifesto, Sex Pistols, Joey Beltram, the ska sounds of the Beat, the Specials, and the Selector, the older stuff of Apollo 440 (now they sampling too much other bands), but for example he is NOT a fan of Kula Shaker, despite their collaboration ("To be honest, I'm not really a fan of Kula Shaker. I've got to be honest. I think that I'm not really into what they do. " - ATN). And he likes of course hip hop (especially the old school stuff).

31 Jan 2019 | Decoded Magazine
Sampling the Sex Pistols, dissing koalas and never taking your foot off the gas: we crank the froth-o-meter up to full with The Prodigy’s Liam Howlett

28 Oct 2018 | DJ Mag
Solid Gold: How 'Music For The Jilted Generation' turned The Prodigy from rave outsiders to festival headliners

02 Dec 2015 | The Guardian
The Prodigy's Liam Howlett: 'We do everything we can to stay off the telly'

05 May 2015 | NME
The Prodigy Interview: On Anger, The Election And Why Electronic Music's "Not Good Enough Anymore"

27 Apr 2015 | Spin Magazine
Q&A: The Prodigy Look Back on the Most Aggressive Career in Electronic History

21 Apr 2006 | Pop Matters
So I Decided to Take My Work Underground: A Conversation with the Prodigy's Liam Howlett

30 Nov 2003 | BigYawn.net
Interview with Liam Howlett of the Prodigy

15 Jan 1993 | Los Angeles Times
Prodigy’s Liam Howlett: Battling With Success : Pop music: As techno music catches the ear of the mainstream, the songwriter struggles to hang on to the genre’s longtime faithful.