Q&A: The Prodigy Look Back on the Most Aggressive Career in Electronic History

Liam Howlett talks the group's first album in six years, and his love of Skrillex and Death Grips 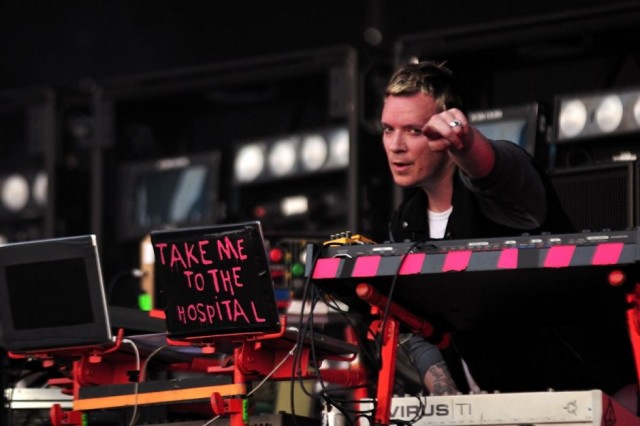 The first electronic group to have a No. 1 album in America, the Prodigy have been responsible for a far longer and more illustrious career than many on these shores may realize. They quickly mastered classic rave’s hyperactive breakbeats on 1992’s Experience and filled out the sound for 1994’s more varied and epic Music for the Jilted Generation, which won them an unlikely Mercury Prize. All of that was before “Firestarter,” “Breathe” and “Smack My Bitch Up,” the darkly-cornered big-beat anthems that most MTV viewers remember them for, combining Kool Keith’s off-kilter hip-hop (literally, as he’s sampled on “Bitch”) and John Lydon’s apathetic punk sneer (meet devil-haired dancer/hypeman Keith Flint on vocals). Flint made for a hell of a video character as well, which is part of the reason they skyrocketed to success outside of a genre that’s often derided as faceless.

This month the group, largely the brainchild of chief producer Liam Howlett, finally returned with The Day Is My Enemy, the follow-up to 2009’s Invaders May Die, featuring guests like haunting trip-hopper Martina Topley-Bird and gutter-poet punks Sleaford Mods on typically raucous beats updated for post-brostep roar. SPIN spoke to Howlett about making dance music aggressive, tipping his hat to Skrillex, and how the Wu-Tang Clan was the last rap group he believed in.

Is it a relief when you finally get your first album in six years out?
I guess it is really, yeah. I mean, it was difficult in places on this record. It was pretty turbulent at the time, sometimes it’s hard to have friendships with people and working with them at the same time. You kind of have to put the friendship on hold while you work, do your job, you know? I’m glad to say we’re all friends again.

Do you feel that better albums come after longer breaks?
You don’t need to do it on purpose. We just want to write albums when it’s time to react to something, you know what I mean? We’re not a “pushed by a record company” band. It’s kind of like, I’m guessing a major record label wouldn’t want me because I’m no good to them. I can’t be, I’m not a “writing an album on the go” kind of guy. It’s got to mean something, this record is a reaction to what’s going on, musically, around us. If you work straight through it just for the Prodigy fans and nothing else, you don’t really know what it is.

Do you have times where, in the studio, that the Prodigy is less of a group than a solo project?
We set out to write a band record so we could play it live. I guess we’re lucky, really, because we’re not writing it for radio, we’re writing it to play live. We’re writing this record to make it to the stage, so we’ve been lucky to have, the band is actually surviving, and the other half of it is the live side. It’s been great.

How did the Martina Topley-Bird collaboration [“The Day Is My Enemy”] come about? Maxinquaye it’s one of my all-time favorite albums.
Unfortunately, she helped record with me properly about four years ago, on another track I’d done. I didn’t really like the track I’d done, but the vocal was killer. I tucked it away for the right moment, and so I pulled it back out without the track. It was really perfect for the concept of this album.

How did you first discover the Sleaford Mods, who guest on “Ibiza?”
I heard them when they first came out, they were speaking my language. It felt really refreshing to have someone come out and speak the truth, know what I mean? It’s something I really got in touch with [Jason Williamson] and said “I know what’s in store, I see Prodigy and I see you, whether it’s another project, have you got any new material?” And he went “Yeah, man.”

So, basically the concept of the track is, it’s not an attack on the island, people have to understand that. I’d like to think of it as reporting back to people about some of the shit we’ve seen with the DJs, you know. It’s like it’s a bit of viciousness, and an exposé really.

You’ve called this your most violent sounding record, right? Your catalog is full of music that slowly became more reminiscent of more angry rock and rap than party music. Were you already looking for ways to break out of the less aggressive mold on your first album?
Not really, it just happened naturally. Like I said earlier, it’s more of a reaction to what’s going on at the moment. Electronic music has really been naturalized, it’s such a wide spectrum now of people from the pop records, rap music has hijacked it. It’s such a wide spectrum, it’s only necessary that an actual band, not DJs, stand up and take a more abrasive and harder edge. We didn’t want to make a dark record, we wanted to make a record that was the Prodigy now. It’s a violent approach, and it’s attacking, but you still feel an uplift. It’s spirited.

Music For The Jilted Generation flirted with politics on a song like “Their Law,” which referred to the illegalization of rave culture. Do you ever feel like you want to make more political music? You’ve compared the Prodigy to the Sex Pistols and Public Enemy of electronic acts.
We could sell out, but we prefer to be like we’ve always been, to be that more hedonistic band. The very fact that we’re pissed out of the gate. Some would say the Prodigy as a band are more “join the riots,” it’s weird really. As far as political, we didn’t even think of it as political, this is our lives.

It’s odd to sound both violent and hedonistic.
I don’t know really, we weren’t trying. The sound, we didn’t work it out beforehand. I want it to be music that wakes me up. I don’t really listen to music at home, I only really listen to music that’s really sort of wake up music. I’m not big on being a purist, I just like the attack of it, what it’s doing.

Did you have any idea that Fat of the Land was going to take off like it did?
In a way, yeah, because what happened was, “Firestarter” came out a year beforeFat of the Land. Of course, we had no idea how big it was going to be in America, that was a big surprise. There were very few breakthrough bands, English bands, so we were really the ones. We’ve always been pissed, a bit. Electronic music does get forgotten about, sometimes, it’s good to remind people how important it was in the ’90s.

What was it like making that record under the pressure after “Firestarter” going number-one?
It was easy, man. It was no pressure at all really. That album, even if you take the hits off that record, you take “Firestarter” or “Smack My Bitch Up,” the record’s quite strong. It’s an album that has both huge records and if you remove them, it’s not inconsistent at all. It’s one that everyone remembers, the record that some people and fans will maybe think of as a solo album for me. It’s still Prodigy but it’s kind of like, some people think the record plays like rap.

It’s probably your most hip-hop influenced record. Have you ever wanted to produce more rappers outside of under the Prodigy name?
Yeah, man, yeah. It’s always in the back of my mind. I’m probably thinking about it all the time. As a side project or something, but with the Prodigy in full swing, there’s no time. It’s something that’s part of my culture, it’s what I grew up on. I’m always thinking, yeah, it might be time to do that.

Are there any rappers out now that you’d particularly want to work with?
Of course, I always like Death Grips. He’s exciting, and I also like more of the straight hip-hop guys, I like more of the alternative hip-hop, though. I’m a big lover of the golden age of hip-hop, Public Enemy in the late 80s, that kind of sound. That sound is one of the coolest sounds that formed the Prodigy. I’m kind of a snob when it comes to hip hop, I’m quite happy to say the last great hip hop band was the Wu-Tang, nothing after that. I love Public Enemy, I love the Wu-Tang.

You also sampled the Breeders and covered L7 on Land. Did you have a special affinity for female fronted rock bands?
Well, I became friends with Kim Deal, and she allowed me to use a part of her record, which was great. She’s a great girl; I love that Kim does what she’s always done, she’s a real rock and roll spirit, she’s the real deal. L7, that was a cover version, that was Keith [Flint]’s idea. I think I’ve learned a lot now about how to approach a cover, I think you should really try and do something totally different. I think maybe that version, it’s not completely and totally original.

Are you surprised that “Smack My Bitch Up” garnered the controversy that it did?
Uh, it was mainly you guys. [Laughs.] It wasn’t that controversial over here, I mean, you look at it now, everyone’s used to so much more controversy about different things. I’ve been in places where they won’t play that track. It’s got a life outside the band. After the record came out, we set out to make the most controversial entrance we could.

Are you a Skrillex fan? I could see you two influencing each other.
Yeah, I think he’s a pioneer. The whole EDM thing in America, I can’t really speak to America, but in the U.K., it’s so boring. But you have people like Diplo, Skrillex, they’re the guys who started the new wave of it all.

By the way, did you know Death Grips’ new album came out the same week as yours?
Yeah. You talk about experimental hardcore wonderful music that’s sets you on fire, that’s it.