Maxim is the oldest member of the Prodigy and his real name is actually Keith "Keeti" Palmer (don't ever call him Keith, HE HATES IT!). Palmer was born in Peterborough to Barbadian parents, the youngest of seven children, and he attended Jack Hunt secondary school in Peterborough. He enjoyed writing poetry and verse and began MC-ing around the age of 14. He gained inspiration from his ten year older MC brother, Hitman, who introduced him into the Peterborough Reggae Soundsystem Scene.

Maxim was often seen at soul all-dayers at Nottingham's Rock City. During the peak of the ska movement in the early 80s, it was not uncommon to see Maxim in Peterborough town centre with his mates, trying to look like The Specials, with the all important black-suit-and white-socks look. Also in the 80s, hip-hop took off, and Maxim, one for evolving with musical trends, became quite a fan. His jaunts around local shopping precincts in the area to do breakdancing 'battles' with 'rival crews' became part of the urban tapestry in Peterborough. This had earned him his first ever TV appearance, on the regional ITV station Anglia, in the local news programme About Anglia.

At the age of seventeen he had his first gig in Basingstoke. Ian Sherman, a fellow musician from Nottingham teamed up with Maxim and they formed Maxim and Sheik Yan Groove, where Sherman made the music and Maxim contributed with lyrics. After recording some tracks together and not getting any attention from the record industries, Maxim decided to disband and went on a three month travel throughout Europe and North Africa. Upon returning to England he moved to London to get more into the music and reggae scene of the metropol. Before joining up with Prodigy, he has worked as sound engineer on many reggae sound system festivals.

In 1990, Maxim was founded by friend Ziggy, who was managing a rave act in Essex, which needed an MC for their first live show. After an unexpectedly successful show, he was congratulated by Liam Howlett, who only had one criticism - he wanted Maxim to tone down the reggae-isms in his MCing - which Maxim did for the next show. He was planning to do just a few gigs with the band, but he later decided to stay. During a date on their first US tour, Maxim was very ill and Leeroy Thornhill had to take over MC duties for the night. Since then, Maxim has developed his own distinct MC-ing style: short snappy lines directed toward getting the crowd going. It often difficult to interpret what he is actually saying, since it is mostly encoded in 100+ decibel screams. Maxim is the band's voice. Though he performed the vocals on some recent Prodigy tracks, his real talent is shown in his way of boosting the live shows. With him, the live songs get a feel totally different from that of the album tracks. 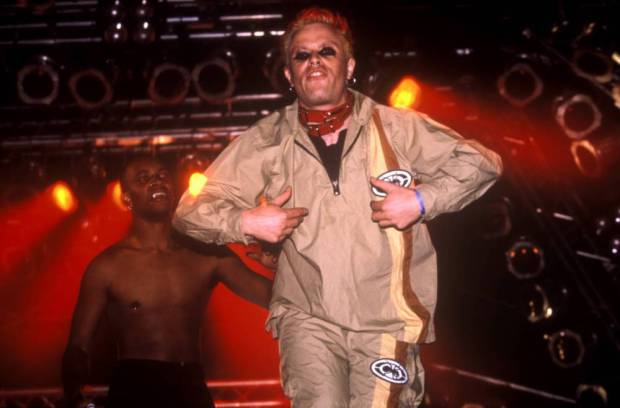 Maxim & Keith giving their 110% at Glastonbury 1995 show just before Firestarter was even released.

Like Keith, Maxim is a fan of unusual dress and make-up. That's why he is very recognizable not only by his awesome MC-ing but also his bad-ass contact lenses (back cover of the Music For The Jilted Generation album, he can be seen wearing his famous cats-eye contact lenses.) and those kilts he loves to wear! In live shows he looks very scary and he try to scare people! He had started out in Prodigy with a shaved head with a small quiff at the front, giving rise to "Tin Tin" jibes from the other band members. Since then he have had many different hair styles and variations. He's a really strange figure - for example sometimes he wears a green skirt (because it's comfortable) and has gold braces over his teeth, just to mention a few of his crazes. His aim is to appear on stage as a knight in a full suit of armour and a gauntlet, so he can scare seven shades of the brown stuff out of everyone in the audience!

Maxim, according to his own words, has always been writing music. He has filled cassettes and cassettes with music, and written tons of lyrics, yet he didn’t disclose any of his works for a very long time. He has written tons of songs and lyrics, most of which have never been released. In fall 2000 he released his own hip-hop style solo album. Maxim is married and has a child called Kai, who was born in March 1999. 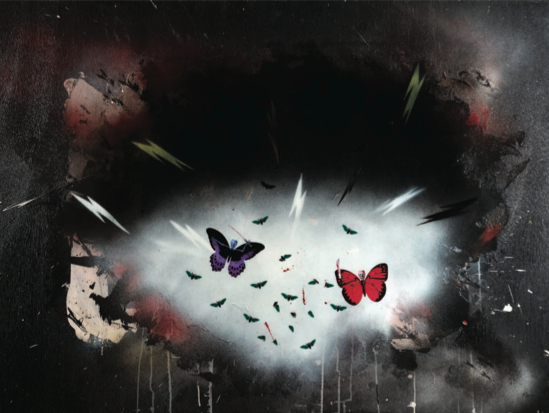 Maxim uses the moniker MM, for his visual artwork, and has been developing as a painter and mixed media artist for several years, gaining insight and experience from artists in the US and the UK. Maxim turned his focus to painting in 2002 when he needed some decorative art for the walls in his new home. Instead of buying paintings, he decided to create the work himself.

“I feel a sense of freedom when I paint. There are no restrictions and you can let your imagination run wild… I now see everything under one umbrella: music, art, fashion…they are all about creativity.” -Maxim

Finding painting an addictively absorbing process, Maxim used it as a means to relax between touring periods. Over time, he met with fellow artists, in the UK and New York, who further inspired his creativity. Realising that art wasn't just about a canvas and paintbrush, he began to develop his unique style. MM’s paintings incorporate a wide variety of media, from glue and paper to ink and even tar.

“If a painting isn’t working and I’m not 100% happy with the outcome – if I feel I haven’t injected any soul into it – what I do is burn it and set it free. To me, it is like putting a wounded animal out of its misery.” -Maxim

It was artist Stuart Semple, a friend of Maxim’s, who eventually convinced him to put on his first exhibition. “I've been totally captivated by Maxim's paintings since I first saw them and feel incredibly privileged to have been able to watch the works develop. He's got an amazing ability to take the dark spots that have probably been in all of our psyches since childhood, and through his mastery of materials, has managed to encase them in something paradoxically gorgeous. He's a fascinating painter.” -Stuart Semple

His first public exhibition was titled LepidopTerror, and it showcased a collection of his own paintings at the INC space in London‘s Covent Garden on September 15-26. 2011.

Maxim has has also designed a range of cake plates, mocha cups & saucers, a large platter, and an exciting mug collection exclusively for The New English. Based on imagery drawn from his paintings, the range features an array of unusual creatures.

The Prodigy’s Maxim reveals his painterly side in his first ever exhibition, immersing viewers in a sensory experience of sight, sound and scent Maxim, under the alias MM, will present his first ever visual arts exhibition LepidopTerror, this September at the renowned I.N.C. Space, Covent Garden. The exhibition will run 15-26th September, and will show his large scale paintings as part of a sensory, immersive experience. LepidopTerror, a new series of paintings by MM, will see the butterfly motif assume a unique and evocative significance. Butterflies, traditional symbols of life, death, rebirth and reincarnation, have been incorporated into the work of some of history’s most celebrated artists, from Salvador Dali to Damien Hirst. MM’s butterflies, however, are rather more sinister – while from afar the viewer is struck by stunning hues and conventional winged beauty, on closer inspection the reality is one of armed creatures, with thoughts and actions uncertain and threatening.

MM’s debut show at I.N.C. Space will incorporate between twelve and fifteen large-scale paintings – including many of his butterfly series. The exhibition, curated in a ‘room within a room’ will engage the viewer subliminally, through sight, sound and smell. Juxtaposed by the clinical brightness of the external space, this enclosing ‘cocoon’ will draw upon subtle such elements as darkness, warmth, and low frequency sound, which will be felt but not heard. Inducing this mysterious ambience, MM transforms a passive ‘viewing’ into a holistic and immersive experience. “The dark fantasy landscape of fairy tales and ghostly wars is where Maxim’s artworks live.” Art critic Francesca Gavin commented. But, as she continued: “Horror in art reflects our awareness of the increasing details of the violence around the world. The depiction of our fears on canvases, such as Maxim’s, can be an attractive and almost comforting resolution to that unease.”

17 Sep 2014 | EDM Sauce
Maxim Overload: An Interview With Maxim of The Prodigy