THE PRODIGY are caught up in a battle over a new film in which they star...

THE PRODIGY‘s lawyers are trying to halt the release of a new film they say has not been authorised and also infringes the band’s copyrights.

A row is brewing over the film Mutant Dogs, which features footage of the band’s 1996 ‘Breathe’ tour cut into a storyline where the Prodigy’s KEITH FLINT plays an MTV-style presenter (Pictured with co-star Charlotte Coleman above).

The film is being edited by Mark Reynolds, a former colleague of the band, who has videotaped many of their on-the-road-exploits and was responsible for the previous Prodigy long-form video, Electronic Punks, released three years ago with the band’s approval.

Charlotte Coleman, who starred in Four Weddings And A Funeral, appears alongside Flint in the new film. It also features Boddingtons Bitter ad girl Melanie Sykes and Casualty‘s Lisa Coleman. Despite the band’s appearances in the film, a Prodigy representative told NME the project does not have the band’s consent and that the inclusion of the live footage constitutes copyright infringement.

Prodigy supremo Liam Howlett said: “During 1994 and 1995, Mark Reynolds spent a good deal of time with the band shooting footage which eventually formed part of the 1995 video, Electronic Punks. Out of interest, we tentatively agreed to get involved with another of his projects but when we did the filming two years ago we felt uncomfortable and when we saw the results we didn’t like them.

“As we understand it, Mark Reynolds has now incorporated that footage into a larger project which he’s calling Mutant Dogs. The band feel that it is unfair to sell this to Prodigy fans on the basis of some sketchy footage. It doesn’t come up to an acceptable standard.”

However, Reynolds claims he originally had permission from Liam to release the film and that two stills of Leeroy and Liam from it even featured on the cover of the band’s last LP, ‘The Fat Of The Land’.

He said: “If you look in their photo book, The Fat Of The Land, there are five pictures that are credited to the film. I’d worked with them on it for 18 months. We’d had meetings at Liam’s house. I used a crew of 12 on the live stuff in Dublin so there’s a lot of money at stake. I have a meeting planned with my lawyers.”

Reynolds believes it is the band’s label XL, rather than the Prodigy themselves, behind the moves to block the film.

“I had problems with XL over Electronic Punks,” he said. “They just wanted a straight promo package and I gave them something more unusual. I don’t know why they’re trying to stop it now but they won’t succeed. If it takes six months or six years, it will come out.” 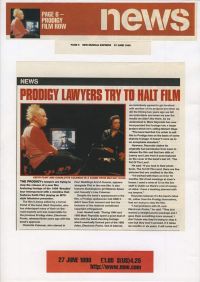