Interview with Liam Howlett of the Prodigy 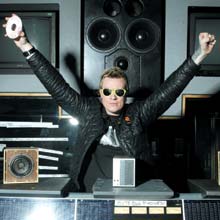 Though hardly a band to shy away from press and controversy, the Prodigy have kept relatively quiet on this side of the Atlantic for nearly seven years. At one point touted to be the next big thing in America, instead Prodigy always have done things on their own terms and stood firmly in a field of their own. One cannot accuse them of trying to hog the spotlight, it just happens that they were standing in it on more than a couple of occasions. In an exclusive Big Yawn interview by phone from his Essex studio, Prodigy mastermind Liam Howlett took some time off from mastering the band's forthcoming singles disc to talk about Coachella, the band's last record, and their future endeavors.

It’s been seven years since we’ve really heard from the Prodigy. How does it feel to be back and playing a gig like Coachella?

It was really quite a fantastic gig. To us that was like the make it or break it gig, we felt that we had something to prove. We played Coachella in 2002 and we kind of weren’t happy with it, but after this gig we felt really positive and restored our faith in America. We have had our share of problems with Maverick [Records] and just general support. It wasn’t a question of not coming back to America, it was just the right opportunity.

You played Coachella back in 2002. Do you remember that gig? What was it like?

It just was an overall sense that we could have done better, though there was nothing bad about it. At that time Oasis were playing and I think that there wasn't as much interest in British acts. But there were tons of British acts this year, there was Kasabian, Bauhaus, Chemical Brothers. Then you had bands like Nine Inch Nails, but looking down the list it was a really good lineup, very brave of the promoter to do that. But clearly for Goldenvoice it is about the music, they’re good guys. They seem to do it for the right reasons, fantastic line-ups, a good cross-section of music and styles. For us it was quite fun to watch the transition of audience through the gig. There were probably a lot of people that hadn't seen us live before, so for the first few songs they just kind of stood there, but then it was cool the way it picked up. Their energy didn't stop after that. In 2002 we played outside and that is always a different energy, but this time we were inside. The tent is a good place for us and I think it came across.

It’s been a while since you have toured the States. Does the gig at Coachella mean that you’ll be coming back again soon?

Absolutely, we don’t need Maverick’s support or blessings to play gigs in America. It would help if they were more behind us, but we have gone from hating America about 10 years ago to really enjoying it. The problem wasn't so much that we hated America, it was simply the sorts of things that didn't work out. There were bad tours, things went wrong, confusion and a lot of problems with publicity and promoters. Those kinds of things can sour a young band very quickly.

You have been called a perfectionist and it took a while for your last record (Always Outnumbered, Never Outgunned) to come out. How do you feel about it now that it has been released and the dust has settled?

I think it was definitely a mistake to wait that long to release a record and that won’t happen again. There are so many different factors involved in the process of that record coming together, but once I got my footing it came together. False starts, band paranoia, and lots of things had to be in line for it to work. Ultimately people didn't show up in the studio so I took matters into my own hands. Looking back though it wasn’t pushing forward enough, but in the end I was happy with the results. Especially now that we have played some of the songs live and remixed them up a bit. Maxim keeps saying that he likes the new tunes now that we’ve done “Spitfire” and stuff like that onstage. It worked out quite well.

You have a great knowledge of old-school hip-hop and house music, as is evidenced by theDirtchamber Sessions disc you did. You have never shied away from name-checking 80’s influences, but nowadays that has become pretty vogue. What kind of music inspires you most these days?

Do you know what? Anything really, I am always amazed at the type of things that inspire me. I constantly listening to music, and I am always waiting for that incredible sound, to try to make me write something that is always better. I want to get blown away and be jealous by what I hear. I have to have that to try to carry on. I could get excited by a beat or a guitar sample. The thing about the Prodigy is that we are not pure, we don’t give a shit about the rules of dance music. That stems back to maybe me being very young, back in 91 or 92, when we had our first success in the English dance scene. The DJs stopped playing our music because we were deemed commercial, and as a result I am reluctant to use the word "dance" because it conjures up the wrong kind of images in my mind.

To my ears Experience is one of the most advanced albums of the 1990’s and still sounds great today. What do you think of that material now some 13 years later?

Well, it definitely was making a statement at that point in time and it represented who and what the Prodigy were. But as a result of the backlash we got in England, I wanted to take a step forward in a more radical way. Any band has to recognize when it's time to keep going and push forward. Whatever the next Prodigy release is that comes out, it will be that same leap forward. On the last record a few things were quite brave, but I think more could have been done. I'm more interested in moving ahead. Experience represented a time and place, there was still a certain innocence with it. We’re doing the mastering for our singles record and I actually listened to some of the tracks off of it yesterday in fact. It sounds quite good, very fast!

Who would you enjoy collaborating with most on your next record? Any timeline on when you are going to do a new one?

I think basically the Prodigy is a band and needs to get back to what we do as a band. This record established me more as an individual, but I think that for the future I'll collaborate and do those kinds of things on my own. As a band we’re 3 people, a unit and you can see that in a live setting. We should push forward as 3 people and it's crucial that we not forget the importance of the collaboration from within. I definitely think that in order to make the whole thing work we need all the elements.

You made a conscious move to integrate a more rock or punk-ish sound into your music, and a lot of people tend to think that crossover makes it more accessible. Do you think that dance music is losing an audience these days compared to about 10 years ago? Or are younger people still discovering it with the same vigor and enthusiasm?

I think that it is probably true that there isn't as much of an audience, but I think that the reason is that people are afraid of the word "dance." I’ve never been a fan of the word "dance." Because for example, there are lot of great disco bands, but then there was a huge backlash against disco. The Prodigy shied away from that and we became very unpure. We are more interested in being a rock'n'roll band than just being labeled a "dance" band. But in terms of most popular dance music, it's run by DJs, and in my opinion there aren't enough young kids with leather jackets and a drum machine on stage, going through their music like a band. I’m not the savior of electronic music, so for me it's more interesting to mix it up. I'm just as interested in the sound of a guitar as I am in the beat of a drum.

You’ve never been one to shy from controversy, but these days you seem to let your music speak for itself. Is there anything that you wish you had done differently when it comes to causing a stir?

Absolutely not. I stand by what I’ve done because it was totally real. The controversy with "Firestarter" for example, we never planned that, it just happened to be one of those songs that caused a stir. The other thing is that we never really apologized for what we said, we stood by everything we did. When we were releasing the last record, people asked me if we should have done something more controversial and I replied that it’s only good when it’s real. People see through the bullshit. There’s no point in doing it unless it’s real.

Has reality TV become a phenomenon in the UK like it has here in the States? If the Prodigy had a reality show of you touring on the road, what could we expect to see?

Absolutely! <laughs> We have this thing called the Farm, it's this program with Flavor Flav, Ron Jeremy, and some other people. They're on a farm and they have to do all these disgusting things. It’s pretty mad. Flavor Flav is just hilarious. Tell you what, this last album would have been a funny thing to see on TV, there were a lot of funny things going on. Drinking, games, people just having a piss time. It was the most fun I’ve had writing a record and I guess because I was ignoring the pressures it just all came together at my own pace.

Finally, did you have a chance to check out any of the performances from the Coachella weekend? What did you enjoy and was there anything you thought that was total crap?

I managed to see Kasabian, they were great. I also saw a bit of Nine Inch Nails. I like my music a bit more funky, and so I thought they were a bit disappointing. I like a bit more groove to my music, I like things a bit more drugged out. I came as someone who didn’t know anything about [Nine Inch Nails], and just didn’t think it was a good environment to see them. I guess I don't quite understand them.

So do you think we can expect to see the Prodigy return to the States sometime later this year?

Absolutely. We're sorry we have waited as long as we have, but we definitely do things when we feel it's right.