There is only one keyboard that Liam really loves, it is his trustly Roland W-30. At the start of The Prodigy's conquest of world domination it was this machine that shaped The Prodigy's sound. All their early tracks were made pretty much with just a single W-30 and he bought more of them to use sync'd together. Liam was so used to the W-30 way of working that he didn't want to move away from it. He knew it inside and out and loved it's raw quality. He stuck to this philosophy right up to Music For The Jilted Generation, The main reason for this is because he didn't want to change the sound of the Prodigy. Although this is a sampling workstation, Liam ignored the sampling section and used it entirely as a MIDI sequencer and master keyboard. He used the W-30 as his main songwriting device until 1997's The Fat of the Land and on-stage as a master keyboard until 2008.

The Roland W-30 is a sampling workstation keyboard, released in 1989. It features an on-board 12-bit sampler, sample-based synthesizer, 16-track sequencer and 61-note keyboard.

The W-30 was the first music workstation from Roland, and it was sample-based, with both ROM and user samples available for sound creation. It basically contained the engine of the S-550 sampler combined with a superb Roland's MRC sequencer and a keyboard. The W-30 is compatible with the sound library of Roland's S50, S330 & S550 dedicated samplers, which is now in the public domain.

The early days
"I remember going down to the music shop in Chelmsford and saying 'What do I need?' I was going to buy a Roland S-10 Sampler and a little sequencer but the guy in the shop said, 'Wait a couple of months, there's this new thing coming out. It's like a workstation in one keyboard.' It was like, 'Man that sounds good.' I got the W-30 and, you know, for about four months I didn't go out. I stayed in every day with the headphones on learning how the thing worked. Man, I just had to learn that keyboard inside and out. "

Live set
"You know, I don't like talking about this, because it gives the secrets away... but here's what we do. Say we've got ten tracks in the set. Right, we hold the samples in bulk on the Akai which holds 32 megs and then use the W-30 to sequence the songs. Take Poison, off our Music for a Jilted Generation album. The opening bars are stored in eight bar sections which I can call up using the W-30. It usually takes Simon my keyboard tech about five minutes to load each one up before the show. "

"Everything's triggered from the W-30s. My set up at the moment is two W-30s and a spare one for the road, disks, and disks of sounds for the samplers. It's for stuff played between the tracks, you know, the links: one of the W-30's really good features is the 'loop-back' facility where the sound can go forward and loop back on itself. I dunno why but Akai have never done that. It's such a useful feature for getting smooth string sounds. "

"On some tracks, the loops are played live. Instead of sequencing them I've got two or four bars of the track all on different keys and I actually play them in. It's really primitive, but it's also cool because you can swap it around and mess it about. Of course you have to be precise with what you play, but I always have a safety drum roll either side of the key so if my finger slips off the key, which happens all the time, I can just roll it in and start it again. It's really spontaneous. It works and it's exciting."

Charly, Everybody in the Place, Wind it Up, What Evil Lurks and used for sequencing right up to Firestarter. Liam used to sequence his albums with this machine but The Fat Of The Land sequencing was the first release made entirely with the Cubase.

This lovely piece of equipment was the main keyboard at the live shows between 1990-2008. He had stored lots of cool drums and breaks to this keyboard or AKAI samplers and used this baby to trigger them. Basically this was the most used piece of equipment of The Prodigy live shows. Liam actually bought the last remaining spare keys from Roland Japan because he used to break them every 2nd show. 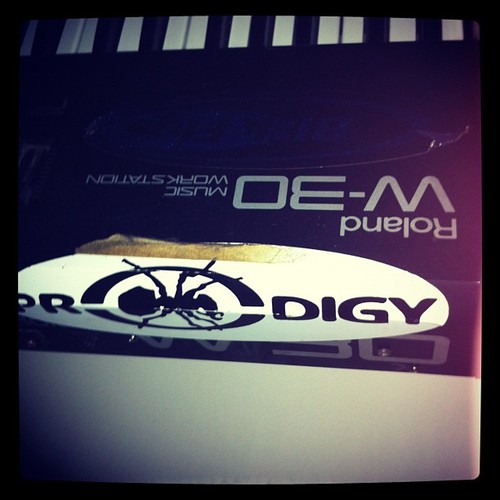 One of Liam's original W-30. Liam posted this photo to his tumbler account in 2013. 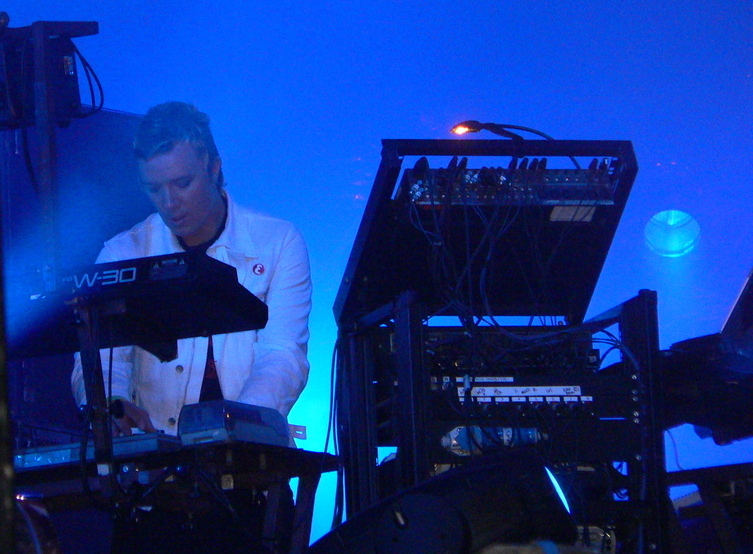 Roland W-30 used to be Liam's master keyboard at the live shows until 2008. This picture is from 2005 and you can also spot some W-30 disks on the lower table. 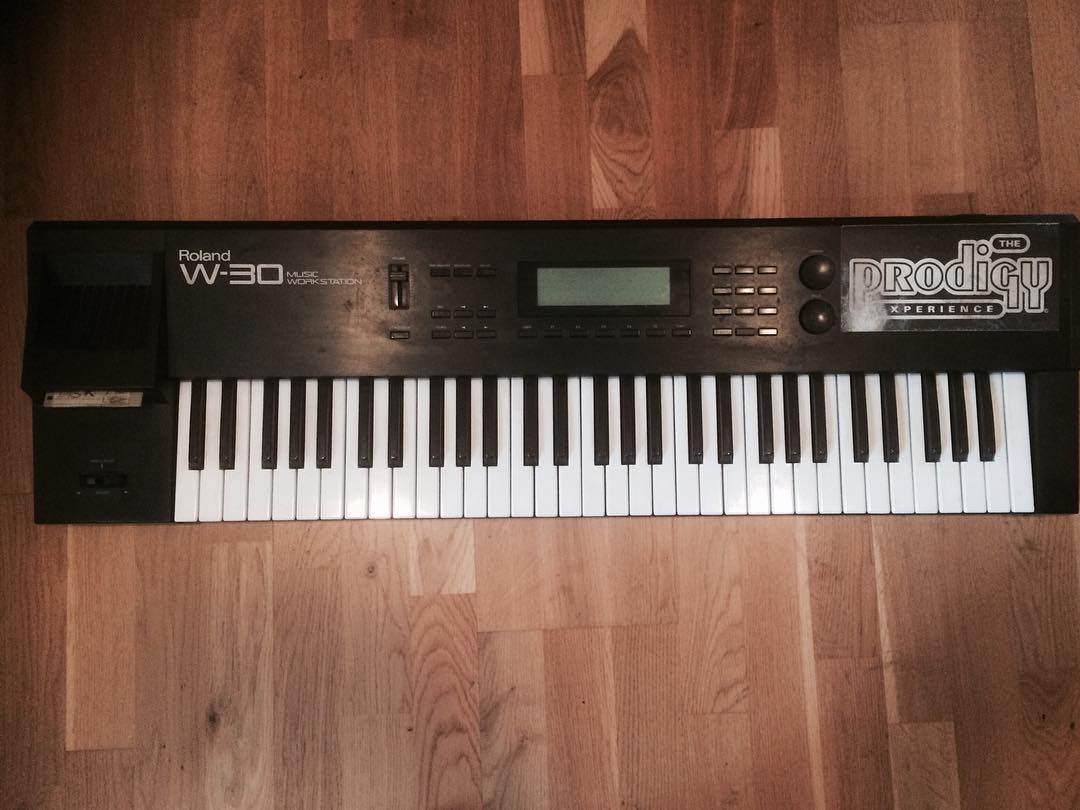 One of Liam's original W-30 was sold to a fan. Read more about it here. 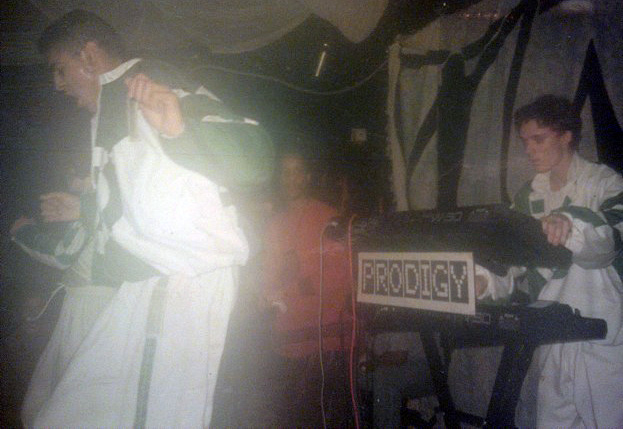 Liam playing live with 2x Roland W-30. Picture is from 1991 as you can see from those white/green costumes. 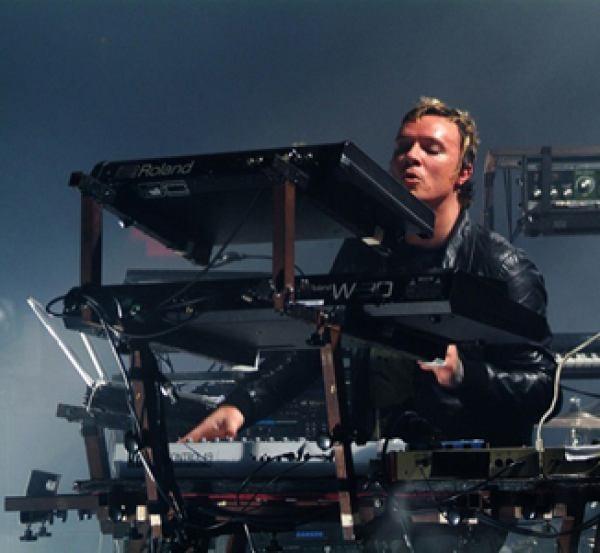 Yet another photo from 2005. At that time Liam used to have two of them in his live setup.