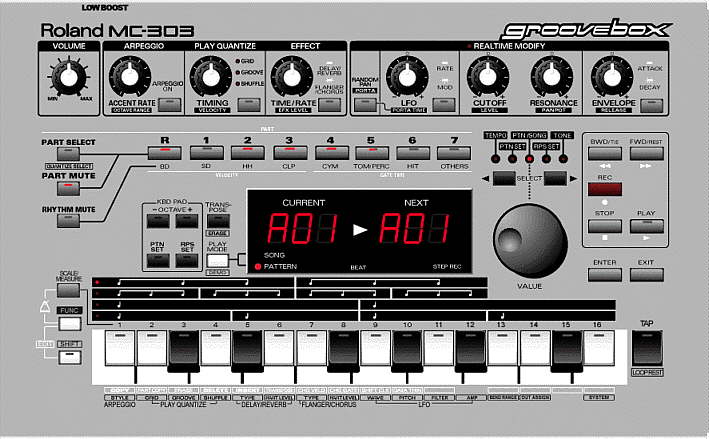 The Roland MC-303 is the first of a series of musical instruments known as a Groovebox. It combines a simple sound module with a sequencer to record and store notation, along with controls aimed at encouraging the musician to improvise the music while it is playing. Despite the number in its name and the hype it received at its launch, the MC-303 has more in common with other MC prefixed synthesizers (such as the Roland MC-202), which contain built-in sequencers, than it does with the famous Roland TB-303. As the first Groovebox, the MC-303 was the first in a line of inexpensive products specifically targeted towards house DJs and amateur home musicians rather than professional producers. It was superseded by the Roland MC-505. It is the predecessor to the Roland D2, Roland MC-307, Roland MC-909 and the Roland MC-808.

The Roland MC-303 Groovebox is a self-contained, retro-styled sequencer and integrated sound module with some very high-tech features. Techno, rap, jungle, hip-hop, acid and other dance styles can now be approached easily and creatively by dance music producers and other groove enthusiasts with little or no musical training. Just lay down some cool beats and fat bass lines from the MC-303's huge selection of sounds and rhythms and let there be groove!

The synthesizer built into the Roland MC-303 is a rompler which contains sounds largely drawn from classic Roland synths and drum machines such as the TB-303, TR-808 and TR-909 along with the Juno series and various other dance themed sounds such as pads, pianos, strings and vinyl scratches. The sounds can be manipulated with a low-pass filter, various modulation capabilities and some simple DSP effects. It doesn't have a sampler, although the instruction book contains instructions for getting it to control an external sampler.

The most important part of the MC-303 is its built-in pattern based 8 track sequencer. Each pattern can contain up to 32 bars. It can record and send MIDI data via the MIDI jacks on the rear panel, enabling its internal sequencer to control other sound modules, or its internal sound module to be controlled by an external sequencer. Although communication with other devices is possible, the main advantage to the MC-303 with its small form factor and all-in-one design is the ability to use it as a self-contained studio, albeit an amateur one. Featuring a micro-keyboard that can also be used as a drum sequencer, the MC-303 imitates the handling as well as the look and feel of other famous Roland synthesizers and drum machines such as the MC-202, TB-303, TR-808 and TR-909.