The Prodigy - Live - World's On Fire

The Prodigy s first ever live album and film available on CD/DVD and CD/BLU-RAY. 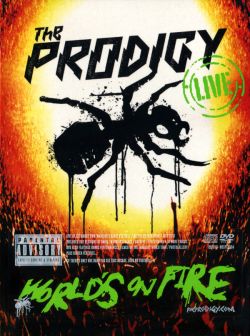 The Prodigy s first ever live album and film World's On Fire became available on CD/DVD and CD/BLU-RAY 23rd May through Take Me To the Hospital / Cooking Vinyl Ltd. Portraying their biggest show to date from their sold out Warrior s Dance Festival at the Milton Keynes Bowl, it includes their biggest tunes Omen, Firestarter, Breathe, Warrior s Dance, Smack My Bitch Up and more and will now be available in full to watch in the comfort of your own place. Just make sure you turn it up & annoy the neighbours!

A lot of thought went into the place where we could throw the best party, we never wanted the typical stadium venue so Milton Keynes Bowl was perfect for our first ever UK Warrior s Dance Festival coz it felt like a mad party in a field. The night was massive for us. It was important to us to bring a proper festival day and night for the people to remember and bring the same intense atmosphere like when we play Brixton Academy.... and it was. Standing on that stage was a truly triumphant feeling for us as the whole place kicked off, we looked out and we were fukin proud...... We never intended to do a live DVD, but when we saw the footage we knew it had to be done...and born out of that we realised we had a great live album too! Liam, Keef & Maxim....(The Prodigy)

In Friday 24th July 2020 The Prodigy celebrated 10th anniversary of the massive headline show at Milton Keynes Bowl. 9pm BST on the day, Worlds On Fire the live DVD was replayed and rewatched together on Youtube including live chat commenting memories from Liam & Maxim. See the whole chat below.

LH - WE WERE CALM AND READY FOR IT BACKSTAGE, I NEVER FEEL NERVOUS BEFORE GIGS , BUT AT THE MOMENT I WALK ON STAGE & SAW THE WHOLE CROWD LIT UP THATS WHEN I REALISED THIS WASNT JUST ANOTHER FESTIVAL

Maxim - Coming out on stage was great, I settled into it quickly. The days building up to it were harder, as the anticipation & excitement of how it would be & how people react was heavy on my mind

​LH - I HAVNT WATCHED THIS IN A FEW YEARS BUT THIS WAS DEFINATLY A GOOD PERIOD IN THE BAND , ROB AND LEO ON FIRE , FUKIN COME ON !

​LH - ESCAPISM , UNITY , MAYHEM AND BASS WERE WHAT THIS GIG AND THE BAND ARE ABOUT

​LH - WE HAD A TATTOO TENT AT THE SHOW, , GET A TATTOO HERE BUT IT CAN BE ONLY AN ANT , IT WAS A SCAR TO HAVE TO REMEMBER A GREAT DAY

​LH - I GOT ONE , MY MISSES GOT ONE AND MY DAUGHTER GOT ONE , MY MATES YOUNG SON SNEAKED ONE IN WHICH DIDNT GO DOWN TOO WELL WITH HIS MOTHER

​MAXIM - There was a funny comment I saw on instagram, someone saying "Maxim did my tattoo at Milton Keynes and totally fucked it up! But I love it as it was him who did it."

​LH - COME WITH THE REMIX !! .. THIS IS WAYYY BETTER THAN THE ALBUM VERSION HAHAHA

​LH - OL SKOOL ANTHEM IN THE HOUSE , PEOPLE CONNECTED WITH THIS TUNE STRAIGHT AWAY FROM THE FIRST TIME WE PLAYED IT AT RAINBOW WAREHOUSE IN BIRMINGHAM

​LH — FLINTY LUVED PERFORMIN THIS TUNE , HE ALWAYS LOOKED FORWARD TO DOIN IT EVERY GIG , I THINK HE COULD JUST LET ALL HIS ANGER OUT ON IT

​MAXIM - When I saw the ambulances on the stage, the size of them, it blew my mind. That’s exactly what we like to do - blow your mind.

​LH - This tune for us has been and will always ever be our live anthem, .. BOOOOM

​MAXIM - We started with World's On Fire and before you knew it ‘Out of Space’ had started to play and I couldn’t believe it was already over.I was on such a high, I didn't want it to end.

​LH - AFTER ALL THE YEARS WE'D BEEN TOGETHER & ALL THE UPS & DOWNS WE’D BEEN THROUGH THIS WAS THE GREATEST LIVE MOMENT OF ALL. IT WAS A COMING TOGETHER OF OLD & NEW SKOOL FANS,

​ITS NEVER BEEN ABOUT HOW BIG THE GIG IS FOR US BUT THIS WAS SPECIAL , A REALLY EMOTIONAL NIGHT THAT MENT SO MUCH TO US ALL.