The Prodigy - Baby's Got A Temper music video 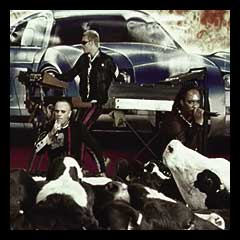 Music video for The Prodigy's controversial single, Baby's Got A Temper, received its TV premiere on June 5th 2002 at 9pm on MTV2 (UK). Then then played it from midnight to 6am nonstop, only that track. The video, (based on a Liam's dream) which features the band playing live on stage, in front of an audience of cows. The Prodigy filmed this new video in June 2002 at Poldi Kladno near Prague (Czech Republic). There are many Czechoslovak communist era properties—the car in the opening scene is the last model Škoda 120 L, the time clock is classical Elektročas model and the carousels include flying (hydraulic arm) swans made in Bílovice.

Video is directed by Traktor who are a group of Swedish directors who have done many advertisements and music videos - for other XL Recordings artists as well (Basement Jaxx's 'Where's Your Head At' and Layo & Bushwacka's 'Love Story'). The same Yellow Hue used on the film that Traktor used in the Fatboy Slim's 'Yo Mamma' video.

The video starts and a car arrives to this strange looking funfair in the grounds of power station. 3 old looking guys with suits leave the car and drink some milk (which later reveals coming from the Prodigy's audience..cows!) before they go into changing room. They punch their time cards and start to transforming into the band members. They are adding the piercings and the costumes. Keith shaves off his moustache. Then they are ready to go on stage and give a fucking gig to the herd cattle who generate milk. Then a fat old lady forces some half-naked women into the place to milk the cows into small milk bottles. No-one’s allowed in this arena with the cows, the cows are milked and the milk’s passed out through a gap to the people. The people is jumping and trying to buy the milk as people get high from drinking the milk. Every bottle is sold and people is acting crazy.. the Prodigy walks into the changing room again and they are taking their costumes off. They put their regular clothers on and walk away from the place.. they also give some tip to the policeman who is watching the event and keeping the "order".

Speaking to NME.COM, Prodigy’s Liam Howlett explained that the video (for new single 'Baby's Got A Temper') had come to him "in a dream", adding: "We built a funfair in the grounds of this power station (in Prague, where the video was shot) and we had an arena of cows and three guys go to work as the band and play to these cows, who generate milk. No-one’s allowed in this arena with the cows, the cows are milked and the milk’s passed out through a gap to the people."

In exchange, the people in the video hand over money and jewellery. "’Cos the milk is like their fucking buzz, y’know, it’s like a drug reference I guess," said Howlett. "This one will be memorable. This is a good video."

Comments:
This is pretty excellent video and works fine with the tune. This is also funniest video the Prodigy ever made. I just don't get it.. it seems like the Prodigy is giving out signs that they are just selling out their music and don't give a fuck about the real people and audience. Pretty ironic. Anyway this is nice video and will be memorable.

Tell your comments and read others from JPN forum