The Prodigy - Take Me To The Hospital music video

The music video became available to view exclusively on the VidZone application for PlayStation 3 on August 4th 2009, it was posted on the Prodigy's official website and Youtube channel on August 5th. It was filmed onto VHS rather than digital recording equipment to obtain an old school 90s look. It starts with shots of The Prodigy in a derelict building (according to The Prodigy it is an abandoned mental hospital), followed by dancing and walking towards an ambulance.

After climbing inside the ambulance they continue singing while trashing it from the inside. After exiting they watch a group of people, who are dressed in black and wearing bear masks, spray paint and further vandalise the vehicle. The video ends with additional clips of the band dancing and singing the lyrics, closing with the camera moving away from the now unrecognisable ambulance.

Take Me To The Hospital (’09 EQ mix) is the third single from the number 1 album Invaders Must Die. Video uses this version of the song and it is also slighly edited and mixed for the video too.

This video was first supposed to be directed by legendary Waltern Stern but eventually it was directed by Paul Dugdale. The Prodigy even posted some photos from the original shooting with Stern to their Twitter page but they were never used and later removed from the page too. It's not known why they decided to change director. 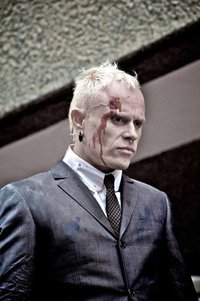 A photo from original shooting with Walter Stern.

We shot parts of the video in a derelict mental hospital. A proper death trap. Holes in the floor and shit falling out the ceiling. We broke in which involved being chased by dogs and a run in with the cops. We wanted a hospital in there but didnt want to shove it down peoples throats. The video was recorded onto vhs. We wanted it to look like an 80s movie you've just found at the back of the cupboard. Doing it analogue gave it a real unique look that you cant create on a shiney computer. Keep it real.

dugdale and the prodigy