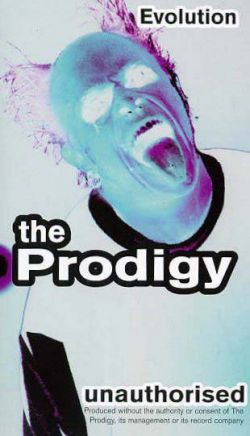 This is an unofficial Prodigy video.

This is an indepedently made programme charting the rise of an astonishing pop success story. 50-minute unofficial flick charting the rise of the group. Neither the band, their management, record company or anybody else connected with the band have consented to or authorised the production or release of this documentary. It contains only some interviews and clips. No Prodigy's music videos or live shows.

Prodigy have condemned the release, which contains no music and features only interviews with people involved with the group early on. A statement from Prodigy says, "We would like to make it clear that they had nothing whatsoever to do with Evolution. This has been made entirely without the consent of the band or their management. "

Videos back cover says:
The Prodigy are one of the most explosive bands of the 90's. Their electrifying performances took them from small underground clubs to audiences of 30,000 at raves and now they're packing out stadiums all over the globe.

Evolution follows the highly charged career of the most dynamic group to come out of rave culture.

The Prodigy refused to compromise their music or attitude by being drawn into the mainstream and albums such as Music for the Jilted Generation and Fat of the Land were thecritically acclaimed result.

Featuring interviews with the band as well as some of the people who have played a part in their astonishing rise, Evolution follows The Prodigy from ground-breaking Charly in '92 through to the power and energy of the chart topping Firestarter and Breathe.