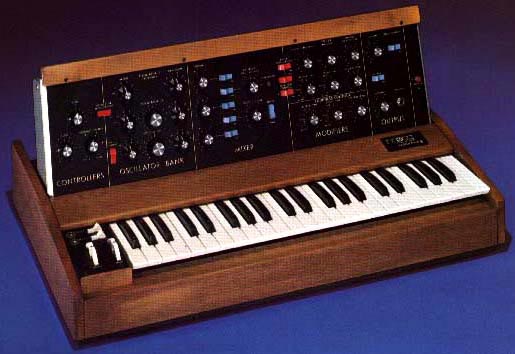 The Minimoog is an analog synthesizer first manufactured by Moog Music between 1970 and 1981. It was a Monophonic Analogue Synth with 3 VCO's and had a revolutionary Moog filter. In the 1960s, synthesizers—in the form of large, expensive, and complex modular synthesizers—were inaccessible to most musicians. The Minimoog was designed as an affordable, portable, simplified instrument which combined the most useful components in a single device. It was the first synthesizer sold in retail stores. It was first popular with progressive rock and jazz musicians and found wide use in disco, pop, rock and electronic music.

After the sale of Moog Music, production of the Minimoog stopped in the early 1980s. In 2002, after founder Robert Moog regained the rights to the Moog brand and bought the company, the Minimoog Voyager, an updated version, was released. In 2016, Moog Music released a new version of the original Minimoog.

Moog Co released the first Minimoog in 1971. Moog said it was "conceived originally as a session musician's axe, something a guy could carry to the studio, do a gig and walk out. We thought we'd sell maybe 100 of them." Moog hired engineer and musicologist David Van Koevering to travel demonstrating Minimoogs to musicians and music stores. Van Koevering's friend Glen Bell, founder of Taco Bell, allowed him to use a building on a private island Bell owned in Florida. Van Koevering used the building to host an event he billed as "Island of Electronicus", a "pseudo-psychedelic experience that brought counterculture (minus the drugs) to straight families and connected it with the sound of the Minimoog".

The Minimoog was in continuous production for thirteen years and over 12,000 were made. Despite the success, Moog Co could not afford to meet demand, nor had credit for a loan, and Moog sold the company. Production of the Minimoog stopped in 1981 and the company ceased all production in 1993.

Other Moog products that has been in use