The Akai S1000 is a 16-bit professional stereo digital sampler, released by Akai in 1988. The S1000 was among the first professional-quality 16-bit stereo samplers. Its abilities to splice, crossfade, trim, and loop music in 16-bit CD-quality sound made it popular among producers of this era. The S1000 also had the ability to "time-stretch", a feature that allowed the music's tempo to be adjusted without its pitch being altered.

The advent of the S1000 paved the way for Jungle music, which later evolved into Drum and Bass. The ease with which it could be used and the high sound quality that it produced created an evolution from the rougher Hardcore genre that preceded Jungle.

In 90s Liam used to have all the live stuff stored in two Akai S1110 samplers. These babies can be seen in his old equipment rack that he used for live shows. These samplers were also used heavily in the studio back then. 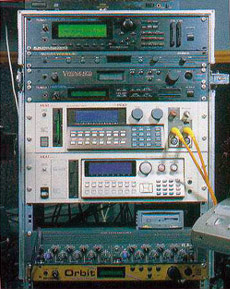 Other Akai products that has been in use