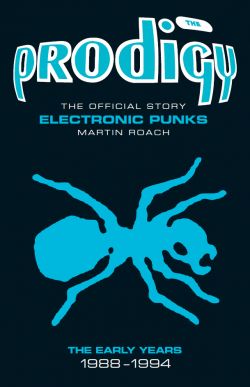 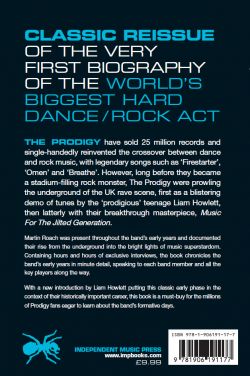 THE PRODIGY have sold 25 million records and single-handedly reinvented the crossover between dance and rock music, with legendary songs such as 'Firestarter', 'Omen' and 'Breathe'. However, long before they became a stadium-filling rock monster, The Prodigy were prowling the underground of the UK rave scene, first as a blistering demo of tunes by the 'prodigious' teenage Liam Howlett, then latterly with their breakthrough masterpiece, Music For The Jilted Generation.

Martin Roach was present throughout the band's early years and documented their rise from the underground into the bright lights of music superstardom. Containing hours and hours of exclusive interviews, the book chronicles the band's early years in minute detail, speaking to each band member and all the key players along the way. With a new Introduction and fresh interview with band members putting these classic early phase in the context of their historically important career, this book is a must-buy for the millions of Prodigy fans eager to learn about the band's formative days.

Everything about the early years of The Prodigy. This is updated official book is the only book along Prodigy by: Martin James that you really should own. Features also a few b/w photos from various occasions.

We never had a masterplan of where we were gonna take this. People have to remember we were just ravers going out partying and all we were interested in at the beginning was getting into parties for free. Playing gigs at the parties was just enabling us to do that. All we knew was that we were as good as the bands we were seeing playing. And we knew we could be up there doing it next to them.

It was an amazingly exciting feeling to be a part of a culture that was happening right there and then; we hadn't borrowed something, people weren't reliving a previous culture, it was brand new. The rave scene was happening right at that exact moment - and we were right in the middle of it.

When I signed my first record deal, to be honest it didn't really register with me. All I was interested in was having DJs play my tunes. If a record deal gave me that, great, and if it also gave me some money to buy some more equipment then even better. In fact, I didn't actually want to do an album, I thought that might be selling out, there weren't really bands around at that time doing albums in the scene, so it didn't necessarily seem right.

When you are young, you are very naive and very open, but at the same time that can mean you are very unaffected by outside forces. I found it very easy not to fall into that, not to be influenced by stuff, I just did my thing, I was totally naive to ... to anything really. That created a really high creative input. As time went on, that aspect obviously became less and less and you have to work really hard to keep that. It's very hard to keep hold of, even if you are the most underground person, situations change, things change around you, it's very difficult, you constantly have to rebel.

One thing I would like to point out that influenced me musically is a label that I owe a lot to - in terms of our sound - Shut Up And Dance Records. They aren't talked about much but I give them respect. Outside dance it was Public Enemy and my hip-hop roots. But in dance that label was underground, a proper London sound, the first people to do breakbeat and house/dance music. Many people might have credited us to be the first people to do that, but actually it was Shut Up And Dance.

The early days were a blur of constant gigging. We've never really stopped touring. It's always been our thing. Maybe for some bands touring is something you have to do to sell records, but for us it was always the main thing. Doing gigs. And we were writing the music for the gigs. That's still what we do now. In fact, it's even more important than ever. Back then, you could survive by not playing live so much as long as the DJs were playing your tunes. But as soon as we had any success,underground DJs stopped playing us. So we just gigged and gigged and gigged. That path connected us to the people out there, it was the biggest buzz.

I'm very proud of those first two albums. To me it's almost two different bands. There are some similarities, obviously the beliefs are still the same across the two records. When I listen to the first album, it is a snapshot of exactly what was going on at that time. I listen to Experience and I hear so many ideas in each track, so many melodies, like every twenty seconds a new idea comes in. That was the way it was, the hyper state of the music, of the rave scene, that is what it was all about - how many riffs and how much excitement and stimulation you can fit in one track from different sounds.

I'd get back home ideally before my dad got up, so as not to disturb him! Usually I'd be really fired up from the night and get straight on the equipment and try to lay down some of the inspirations or sounds I'd remember from the night before.

The process was simpler in many ways back then. Firstly, the equipment was so simple: you really had to stretch your imagination and also the equipment could only handle so much information, you really had to get as much down as you could on those tracks, there was limited sample time on these machines, so you had to make the most of what you'd got.

Quite soon after that first record I got quite disillusioned with the scene and fed up, it totally changed. People were sucking off the scene just to make money, putting on shit events and rippin' people. I was thinking of a way that the band could survive and push forward. Then we heard Rage Against The Machine whilst in LA and that opened our minds up to a different sound and feeling, it was like Public Enemy with the raw rock power energy. That led on to Jilted. That album was also a reaction to what was going on in the dance music scene - for example, 'Poison' was a reaction to everyone turning up the tempo on jungle to ridiculous speeds, crazily fast, so we were like, 'Fuck you, we are doing something slow and you're gonna love it!' ; we also hated the Euro dance thing that was getting in people's ears so much, so I wrote 'No Good' to try to destroy that. I think it's quite a forward-thinking album, whereas the first record was a pure snapshot. Jilted was the moment which pushed things in a different direction, it was a much darker approach. That was the product of an underlying anger in the band. That feeling that people didn't necessarily understand us, of not wanting to be labelled, just wanting to push things further, do something different. That just fuelled us. We were being labelled a techno band and all that kind of shit, so I brought guitars into the mix because it was a new sound and energy for me, I knew it would piss the purists off. That's the point, this band has always been anti-purist, we still are, make something different for fuck's sake ... I'm very proud of that record.

Reading this book again just confirms what I remember, I can see the hunger and self-belief. It's much more difficult for new bands to do that these days, because so much hinges around money, but when we were first out there, we didn't have that, we were signed to an independent, we turned so much stuff down all the time, we just didn't give a fuck. We'd say, 'That's not right for us, we can't do that.' But there was no masterplan, we made it up as we went along, it wasn't like we were aiming to sell millions of records, we were just like, 'There's a right way of doing this and there's a wrong way. We've got to live with ourselves and we know if something is cool or not.'

We knew so much about the scene we were from and therefore we knew what sounded original, what would or wouldn't hit because we were ravers ourselves. We were testing the music on ourselves to see what would buzz. We were four geezers taking Es and all that, and even when all that slowed down, we still knew when something hit the spot. I guess once it's in you ... you know.

Self-belief and hunger are crucial. Obviously you have to have a talent and a creativity, a flare. But self-belief and hunger ... that's what it's all about. To this day, these are the two factors that drive us, a total understanding of not giving a fuck about anyone else.