ADAM YAUCH has responded angrily to accusations of hypocrisy levelled at the Beastie Boys after they asked the Prodigy not to play ‘Smack My Bitch Up’ during their Reading Festival set on August 29. Many readers have phoned and e-mailed NME questioning the Beastie Boys’ stance, pointing out that they toured the UK in 1987 with dancing girls in cages and that the lyrics to some of their songs are just as offensive as those to ‘Smack My Bitch Up’.

In an e-mail to NME, Adam Yauch admitted that the band’s stance might seem hypocritical to some but claimed they had learned from their “mistakes”. He explained that when the Beasties perform some of their older songs now, they change the lyrics. In the past, the Beasties have penned such lyrics as: “Girls to do the dishes girls to clean up my room/Girls to do the laundry… that’s all I really want is girls/Two at a time/I want girls” from ‘Girls’ and from ‘Paul Revere’ (singing of sex with a female partner) “I did it like this/I did it like that/I did it with the wiffle ball bat”.

In 1985, MCA (Yauch) declared, during an interview with NME in which he discussed “fucking ugly women”: “Basically what we’re saying is that we like fucking women with big floppy tits and nipples like omelettes.” Yauch’s attempts at moral censorship were strongly rebutted by Prodigy’s Liam Howlett last week who told NME the band “should respect other people’s freedom to express themselves”. It’s also come to light that the Beastie Boys tried to stop the Prodigy playing on the same bill as them at Reading. A number of agents connected with the festival said that the Beasties had full say over who appeared with them. Prodigy were missing from the initial bill because they were playing Phoenix. However, when that festival was cancelled, they were incorporated into the Reading line-up. Despite protestations from the Beastie Boys, the Prodigy remained on the bill.

The background to the controversy began on Friday evening (August 28) of the festival when Liam Howlett received a phone call at home from Adam Yauch and Mike D, asking him not to play ‘Smack My Bitch Up’ during their set the following evening. Despite friendly discussions, Prodigy played their set as planned, and before ‘Smack My Bitch Up’, Maxim told the crowd that the Beasties had tried to stop them from playing the song. “The way things go, I do what the fuck I want,” Maxim said. During the Beasties’ set, Ad Rock responded to Prodigy’s decision to play the song by saying, “From where I’m from, it isn’t cool.”

Last week, Adam Yauch e-mailed NME to clarify the Beastie’s position. It read: “With regard to the Prodigy playing ‘Smack My Bitch Up’ at the Reading Festival. Here’s what happened. We felt uncomfortable with the meaning of the lyrics and felt that if they were going to play the song then we would be obligated to comment on it from the stage. However, we decided that rather than make a media event out of it, we’d prefer to call them and tell them privately how we felt, in the hope that they would strike it from their set. When we called, we asked them if they’d consider not playing the song, and told them that if they did play it, we would feel obliged to say something from the stage. We explained that although this may sound hypocritical, we recently have been trying to be more careful in choosing what songs we do play. We are in the process of learning from our mistakes, and feel that some of the things we did in the past that we thought were a joke ended up having lasting negative effects.

“They responded by telling us that the meaning of ‘Smack My Bitch Up’ was not what it appeared to be. They felt that they were, in effect, subverting the meaning of the title. We felt that the meaning of the song comes across clearly and that it promotes violence towards women. “Though it may seem strange coming from us, there seems to be a real abundance of violence towards women imagery in film, music, media, etc. And we felt obligated to try to affect change. Ideally it would have been in a non-publicised manner. However, if the publicity generated promotes awareness on the topic, perhaps that is a good thing after all.”

However, Liam Howlett remained dismissive of Yauch’s feelings when shown the e-mail. He told NME: “I still respect their music, but I think they should respect other people’s freedom to express themselves. As far as I’m concerned, the Beasties have got completely the wrong idea about what ‘Smack My Bitch Up’ means – if they watched the way that the crowd responded to it on Saturday night, maybe they’d have understood better.” 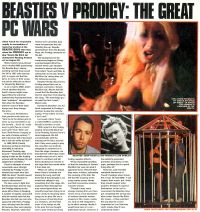