My Friend Keith Flint, The Voice Of A Jilted Generation 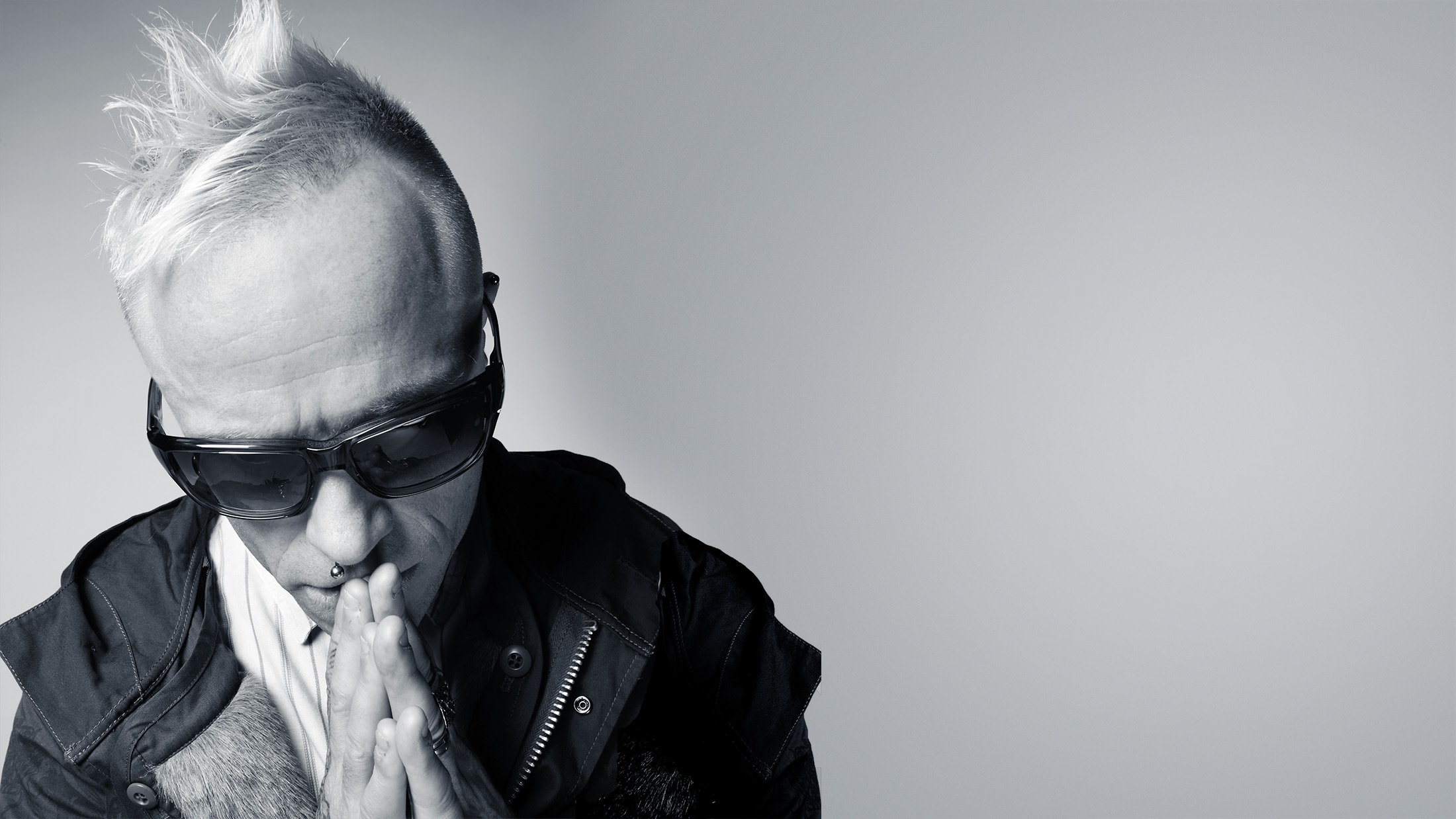 A tribute to the late Prodigy vocalist, Keith Flint, courtesy of the Kerrang! man who knew him best…

Some 25 years ago, writer and photographer Mörat was responsible for bringing The Prodigy into the Kerrang! world. On March 4, 2019, as the news of Keith Flint’s tragic passing broke, he penned this heartfelt tribute to a man he came to know away from the stage – words that echo loudly, one year on…

This one hurts. Fuck, they all hurt. We’ve lost too many in recent years, and it will never get any easier to deal with. But somehow this is different. The fire has gone out. At just 49 years old, Prodigy frontman Keith Flint died by suicide. The party is over.

And maybe that’s why this sucks so much and is so very difficult to comprehend. You see, The Prodigy didn’t write sad songs, never fell on black days. They were the soundtrack to ’aving it large and jumping around like your boots were on fire, the punkin’ instigators who always put a smile on your face. Whether it was on a club dancefloor or in a muddy field, you couldn’t not dance, couldn’t not feel alive to your very core. And Keith, in many ways, was the host of the party, danger illustrated, mad as a bag of weasels, the twin-mohawked loony with a lust for life… A life ended far too soon.

I first saw The Prodigy when they headlined the second stage at Glastonbury in June 1995. It was an accident. A couple of friends wanted to check them out, so we stumbled across the big field and waited for what seemed like an eternity. The booze was wearing off and had I realised that these were the same white-gloved ravers that I’d seen on telly dancing around to cat noises (the Charly single of 1991), I’d have gone elsewhere. Instead, they hit the stage with Break & Enter and the entire field went fucking nuts. We danced like maniacs; punks, bikers, hippies, ravers… disparate clans not giving a fuck.

On the Monday morning I went into Kerrang! and told our long-suffering then-editor, Phil Alexander, that I wanted to write a feature about them. Perhaps unsurprisingly, he said no. This was not a band who were on Kerrang!’s radar. At all. Hell, they weren’t even a band, just a bunch of button-pushing buffoons who were the antithesis of everything the magazine stood for. He continued, despite my pleas, to say no for the rest of the week. And the week after that.

Two months later – having not shut up – I was finally dispatched to T In The Park in Scotland to do a two-page feature, and, once again, The Prodigy knocked it out of the park, untouchable in every respect. They also cancelled an interview with the BBC in order to talk to Kerrang!. It was the first time I met Keith Flint and he, like the rest of the band, were not at all what I expected. He was quiet, polite, friendly, funny, and, what’s more, strangely grateful that Kerrang! were giving them the time of day. Music For The Jilted Generation, from 1994, was a Number One album, they were already massive, and yet they acted as if we were somehow doing them a favour and not the other way around.

It was difficult not to like Keith. A previously unemployable hippy/biker, he’d bummed around Europe for eight months before returning to his home in Braintree in the late-’80s and stumbling across the burgeoning rave scene, drawn to its energy like a moth to a flame. But he was also a veteran of the Hells Angels Kent Custom Bike Show and a kindred spirit.

“I used to go and watch the Hamsters and Dumpy’s Rusty Nuts at these biker things,” he told me. “Roar there, get stoned, you couldn’t ride home so you’d get pissed and stay the night, sleeping beside your trusty steed.”

He loved his bikes and would eventually come to own a racing team, Team Traction Control, who competed in the British Superbike Championship and won three Isle Of Man TT races. Ever the adrenaline junkie, he was also clocked by Motorcycle News doing 167mph on a drag-strip. Among the tributes pouring in following his death, there came one from World Superbike Champion Carl Fogarty, such was the respect for him in racing circles.

But I digress. When that first feature came out in Kerrang!, the magazine received death threats. The Prodigy was not metal! And, to be fair, people were right; The Prodigy was anything but metal. They did, however, kick major ass, and over the next few months the tide slowly turned, not least with the release of the brilliant Firestarter single in March 1996, which featured Flint on vocals for the first time and spent three weeks at Number One. The iconic video, featuring a pierced and snarling Keith apparently advocating arson, was everywhere, the Daily Mail’s headline shouting ‘Ban This Sick Fire Record’. Much to The Prodigy’s amusement, there were even questions asked in the Houses Of Parliament.

The Prodigy had stopped doing press at this time – they simply didn’t need it – but it says a great deal about them that they continued to talk to Kerrang!. We’d stuck our necks out and they didn’t forget it. (Indeed, later at the Kerrang! Awards 2006, Keith and his bandmates would pay tribute to our long-running support: “We’re not here to just cruise around picking up awards because we think we’re cool. We’re here for a reason: because we were supported, and because it was real. Fuck everything else.”) And so I got to know Keith a lot better over the years, both on and off the record. I followed them around the world – Australia, France, Holland, Ireland, Los Angeles, all around the UK. Once in a while we’d sit in his hotel room smoking weed until the sun came up. They were never less than awesome, and Keith was never less than… Keith. He wasn’t just a bonkers firestarter; he was a multilayered, complex human being, not always comfortable with fame, sometimes even a little shy, but never less than personable and down to earth.

“I’m really pleased that I’m quite mellow in myself,” he told me one time. “It’s just as shocking for people. They’re almost waiting for me to explode. But that’s me, and what I’m like onstage, that’s me too.”

Likewise, his ‘image’ – the flame-haired mentalist – was far more than just an image.

“It’s just me,” he explained, when The Fat Of The Land was Number One in 22 countries and he’d become very much the face of a generation. “I didn’t design it for the band, but the band allows me to do it. Anything I do now is for the band because that’s my life, but I don’t do it for the band in the first place.”

More than anything, it was the band that made Keith happy. We talked about it often, the buzz he’d get from being in one of the greatest live bands on Earth, charging around the stage like he’d been let off a leash, often diving into the crowd to be one with the audience. That massive rush.

“Before we went onstage at Brixton Academy, you couldn’t have injected me with any drug that made me feel better than that,” he said. “Any more than that and I would’ve felt ill, my head wouldn’t have been able to handle it. It was like tripping to the max!”

“I’m seriously frightened of becoming [old], ‘cos I reckon I’ll be firestarting until I’m 60, with this beer gut, thinking I’ve still got it. I won’t have to shave the middle of my hair because I’ll be totally bald.”

That was Keith’s sense of humour. At the height of his fame, he got a bit pissed-off with people forever shouting, ‘Firestarter’ at him everywhere he went, but in later years after he bought his pub, he saw the funny side and by all accounts had a log fire and a swear jar into which people would have to put money whenever they said the inevitable.

But with the massive highs come the massive lows. Keith made no secret of his battle with drugs and depression. Like all of us, he had his demons, an unhappy childhood and a broken home. As early as 1996 we talked about Kurt Cobain’s suicide and, almost casually, he remarked, “I could kill myself easily.” Then, in 2015, there was an interview with journalist Matt Blake. “I’m not saving up for anything,” said Keith. “I’m cashing it all in now. I’ve always had this thing inside me that, when I’m done, I’ll kill myself. I swear to God that’s not suicidal, that’s a positive thing.”

The tragedy is that The Prodigy were far from done. Only a couple of years ago, the No Tourists album debuted at Number One, their sixth consecutive album to do so, while the likes of Invaders Must Die and The Day Is My Enemy still feel as fresh and vital as the day they were released. The Prodigy had shows booked, minds to blow, and so much more timeless music to offer. But now all we can do is hope to remember the good times. Not just good, but the best of times. The all-nighters at Brixton Academy, dancing in the pissing rain at Glastonbury and Reading and Download, and not giving a fuck about tomorrow because The Prodigy were now. More than any other band, they brought us together, broke down barriers and made us one. And they did so entirely on their own terms – vastly influential and yet totally inimitable.

“To walk offstage one day and think that’s your last show seems more frightening than death,” Keith told me a long time ago.

If only it had been.

Rest in peace, firestarter. We’re going to miss you.