We're having lunch in a Wandsworth wine bar, me and The Prodigy, and Keith has ordered lobster, "with an instruction manual on how to eat it. " Then he's given a five minute stand up demonstration of the reggae techno skank. Thankfully he's taken off the Afghan waistcoat, leaving a second hand fashion collision of long tatty shorts and backwards baseball cap, but now he's talking about the Essex-east end attitude. The, "I come from East London, don't get out of bed for less than £70," approach.

The Prodigy's home town of Braintree is, he says, just faraway from London not to share that attitude. Essex. Home of Chingford and Birds of a Feather, Essex girl jokes and the Essex man, the crucial constituency of Basildon and everything that's naff. If Britain has an equivalent to America's Mid-West of shopping malls and middle thinking, then it's Essex. The Prodigy couldn't come from anywhere else. Because Essex is also the spiritual home of rave in its massively popular, totally cheese and all the toppings, 1990s form. In its pop music form. Home to the frenetic Suburban Base label, to the Sierra and sunstrip D-Zone, to Shades of Rhythm and hordes of baggy clad rave kids. And to the Prodigy, the ultimate cheesy teen rave act who burst from the big legal raves and to the big legal charts by sampling Charly the cartoon cat and starting what must be the most inane sampling phase in the history of dance music. And then following with a track entitled, in the worst dodgy MC fashion, Everybody in the Place - arguably a great pop song for 14 year old ravers, and there's nothing wrong with that, but 14 year olds had previously had little to do with raving.

Keith, Mr Essex Raver himself onstage and off, is one of two Prodigy dancers, Leeroy wry and lanky and opting for steak, is the other. Sitting opposite (and also on the steak) is Keeti the MC, the only member not from Braintree - a peaceful sleepy town in the middle of nowhere. Which just leaves the real Prodigy, he who writes and produces and creates all the music from a home studio in self-same Braintree. Liam Howlett (yes another steak) is just 20 years old and he's already got two top 10 singles stuffed down his trousers. When I meet him he's dressed down in purple jogging pants, a torn jumper and big trainers. He shoves some fan letters he's just been handed in a pocket and shakes my hand. "Nice One", he says.

In rave terms The Prodigy are massive, their fan base a huge pile of 14-19 year old ravers who got into the scene just as The Prodigy started making records. Which for many original ravers is when they got out. For their fanatic fans, The Prodigy are the essence of rave. There's little distinction between the crowd and creator. Liam Howlett doesn't just look like his audience, those scruffy, spotty masses, he is one. That's one reason why they write fan letters to him, telling him "thanks for the tune, nice one" and asking questions about equipment he uses. Proof, if further were needed, of the kind of identification going on here.

The Prodigy, the epitome of rave, overground Essex style, make simple often obvious and always over the top rave tunes; rave tunes as pop tunes. Made for rave kids by rave kids. A tight breakbeat, a slightly crass melody, one keyboard noise, a couple of crowd noises and maybe one good idea. In the rave world, where one good noise can spawn a hundred records, Liam's a regular trailblazer. And Liam's the one the kids, in the real sense of the word, identify with, the lad gurning next to you with a computer in the bedroom and a floppy disc full of dreams come true.

Liam is heir to the home-made computer enthusiast tradition that goes back to Derrick May and to A Guy Called Gerald and even to the bedroom days of punk rock. But when Charly turned from wacky hardcore anthem into chart-busting gold dust, Howlett's silly little novelty tune joined another, far less honourable heritage. One that goes back to Jonathon King and Keith Harris and Orville and a million nightmare novelty records that countless grinning Top of the Pops goons have introduced over the years. The great awful British novelty song. That song, the one everyone hates and still gets up for. Charly the squealing cat, the "birdy song" of rave, the Russ Abbot of house.

Like punk, rave has a rogues gallery all of its own. And if someone like Shut Up & Dance take the place of Sham 69, then the Prodigy are Jilted John. Nobody told them that the joke isn't funny anymore.

The Prodigy don't buy into any of this. They came from the rave scene and as far as they're concerned that's territory they still occupy. "Its so hard to keep an underground respect when you've got a record in the charts," says Liam over his steak. "We try our hardest to steer away from losing that buzz, from being a live act. That's what we are. We don't want to go on Top of the Pops so we didn't. We didn't want to go in Smash Hits and all the other stupid magazines and stuff. Any interviews we did we thought through carefully and were in well read and respected magazines. " 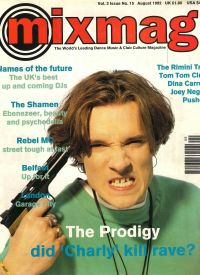 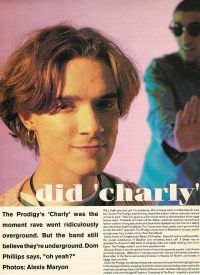 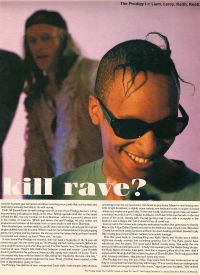 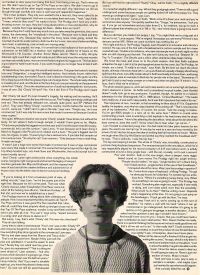