Issue 83: Liam Howlett of The Prodigy

If you want to renew the tax disc on your car, you need Form V11, unless you want the discto run from a later date, in which case ask for Form V10 at any main post office or Vehicle Registration Office. If you want to renew your insight into the techno-pop psyche,starthere. This month: Liam Howlett of The Prodigy.

Prodigious Liam and The Prodigy have four hit singles and an album Experience behind them, and have just completed sellout tours of Japan and Greece. The autumn will continue te live presence in Europe and America, with UK dates already confirmed. A new EP One Love is scheduled for release in September, followed by a single and a brand new album by the end of the year.

1. What was the first synthesiser you ever played?
"Moog Prodigy. "

2. Who is your favourite musical pioneer?
"Pink Floyd. "

3. What's the difference between Take That and Stravinsky?
"Stravinsky wrote good original music. Anyway, who cares?"

4. What's the difference between a drum kit and a drum machine?
"Size!"

5. Playing live: why bother?
"You may not think so, but I feel a dickhead miming in front of a crowd"

6. Which record says most to you about music technology?
"Any Aphex Twin tune, because he creates his own technology"

8. How do react to hearing a sample of your music on someone else's record?
"Depends who it is. Someone respectable, it's OK. 2 Limited - I'm getting paid in full. "

9. What is the next piece of equipment you would like to buy?
"A Casio home keyboard with pop/rock/disco preset rhythms. "

10. Will technology become invisible?
"No, but it has already become too easy to write music. " 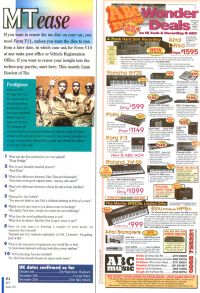