He was a teenage graffiti tearaway; now his hobbies are controlling things and intimidating Americans. On top of it all, the Prodigy kingpin keeps a trim Japanese garden. Picking up a hoe and donning our wellingtons, we wonder...

How the devil are you?
Are these the same questions every month? Fuckin' hell, I could have practised. I'm fine. Alright. I'm pretty much over Christmas now.

What was the first gig you went to?
UK Fresh '86 at Wembley. It was a massive hip hop jam. I was fifteen. Everybody was there: Afrika Bambaataa was playing, and Word Of Mouth. When I was thirteen I was really into The Specials, but I was too young to go to gigs. Me old man wouldn't let me.

What were you like at school?
Like anyone else: not particulary bad, not particulary bad. Me and my mates used to take the afternoon off and go and do some graffiti around the industrial estates in Braintree. Did I get caught? Yeah all the time. I'd come back to school and I'd have spray paint all over my hands.

If you weren't a rock'n'roll star what would you be?
A Japanese garden consultant, to be exact. I'm really into Japanese culture, bonsai trees and the philosophy behind them.

What's your most treasured material possession?
A watch my nan gave me before she died. She was a National Health nurse, so it's one of them watches they wear on their breast. I was really close to my nan.

What's the worst record you've ever made?
I don't think I've made a worst record, but I have done a worst remix. It was of this Scottish rave band called TTF, around '91 or '92. I did it for the money, all five hundred quid of it. I did it in about two hours and it came out so shit, I can't believe I actually did it. Tell you what though, my version was better than theirs.

When did you last cry and why?
When my nan died a couple of years ago. It's like I said before, we were really close.

What's your poison?
Definately tequila. It's the ultimate buzz drink. It's more like a drug buzz than an alcohol hit. If I just drink it on it's own I don't get hangovers, but if you mix it with champagne, you're totally fucked. Around Christmas time, we were doing the old tequila slammers with champagne. I'd done it once before and been really ill, in fact it was the only time I've ever thrown up through drinking, but this time I was careful. I only done three, but man, the hangover was so bad...

What's in your pockets right now?
Nothing. I've been out clothes shopping this morning and I've got these new trousers on, so there's nothing in the pockets right this minute.

Who was the last person you punched?
I had to hit one of our fans, actually. It was when I lived in Braintree. He came round my house at one in the morning, knocked at the door, and started preaching to me about whether I'd had a relationship with the devil. Then he lost it. I argued with him for about ten minutes, then he tried to push his way into my house, so I hit him. I've moved away out into the sticks now, but in the last two weeks, four different people have come down. You're in a band, and it's OK if someone just wants to get an autograph, but some of them are just mad.

What was the last record you bought?
It was the soundtrack of Enter The Dragon. It's got this wicked break on it and I've been looking for it for ages. I might use it on a track.

What characteristics do you think you've inherited from your parents?
My dad does this really annoying thing. You ask him a question and he says "Yeah... no," right next to each other. It's his way of agreeing with you. "That's a great jacket. " "Yeah... no. " Other from that, nothing else. Nothing from my mum. Nothing physical.

What's your culinary speciality?
Red Leicester cheese and pickle toasted sandwich. I might have one in a minute, actually.

What is your greatest fear?
Living in America. I just don't understand the place. I can't understand the American mind. I love playing there though. In America we play AT the crowd. It's really confrontational.

What music would you have played at your funeral?
Heh heh. Nite Club by The Specials. It's a real jump-up tune. Nothing depressing.

What's the greatest film ever made?
The Wizard of Oz. You could say something like Casino, but no matter how old I am, I can't think of many other films with that warming feel about them. I just bought it on DVD.

Can you recite a line of poetry?
(immediately) No.

Have you ever been arrested?
I've come close a couple of times, got cautioned, but it was for things that weren't serious enough, like defacing public property.

What turns you on?
Cocaine sex. No, not the Renegade Soundwave record. The thing.

Where are you off to now?
The kitchen, to make a Red Leicester and pickle toasted sandwich. 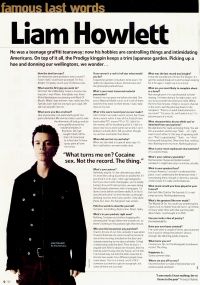