Prodigy prime mover Liam on DJs, dancing and dirtchambers.
They are the biggest dance punk metal beats to dominate planet earth, but since they finished touring the Fat Of The Land album last August the Prodigy have been relaxing in their native Essex. The only thing that’s been heard from them are pronouncements from main man Liam Howlett that there will be no more Prodigy albums and no more tours. The boy’s had enough. Mad Keith’s at home trying vocal experiments. Maxim’s in his home studio recording an album. Even big Leeroy’s getting stuff together. Now Liam’s releasing a mix album of all time top Prodge block party tunes. Loaded decided to find out more about the, ahem, Dirtchamber Sessions and what’s happening in the fat lands of Essex.

What have you been doing with all this time off?
”Fuck all, mate. This year I moved house and built a new studio, as well as being on tour at the same time. It was a bit of a headfuck so by the time we did Reading we’d had enough. I wanted to get back in the studio. Basically the live show had taken over the recording. Any band will tell you it gets fucking boring playing the same songs and shit for more than two years. I’ve been snowboarding, that’s what I’m into in the winter. Only like three weeks. It’s great just to get away. Apart from that I’ve been really just enjoying time off, not doing fuck all really, going out and just general fuck all.”

Going out where? Clubbing?
”What do you mean by clubbing? Going to dance clubs and like dancing? No I’ve never been into that. I’m into bars, going to watch bands play, shit like that, general parties, but I’m not really into fucking sweating in a club.”

Cars are more your things, aren’t they? You’re known for having more than one motor.
”Am I? I guess it’s just one of those things. You’re lucky to earn money, you buy a house, you buy some cars, that’s the way it goes. I don’t terrorise the streets of Essex with fast cars but I like driving cars, yeah.”

Is that big, chunky, fuck-off cars or little speedy numbers?
”Big speedy numbers. The only car I really like is the Ferrari F40. Ferrari is, as far as I’m concerned, are for people who want to pose or who are too fat and earn too much money – but the F40 doesn’t really come under that description. It’s basically a driver’s car – it’s got no interior in it, it’s like a racer. It’s a driver’s car but I’m not like Jamiroquai, don’t get me confused with that. I don’t wanna come across like Jamiroquai but I love the old Ferrari F40. It’s the bomb, y’know?”

I hear you’re a classically trained pianist. Do you ever have a quiet night in playing Brahms?
”No, no. Only at Christmas. But I tell you one thing – I really wish I could rattle off the old Bullseye theme on the piano. I’d love to get the music to that and learn it, so if you know anyone who can get that music for me...”

We look forward to the collaboration with Jim Bowen, but surely the mix album won’t be heavy on TV themes. What music can we expect?
”Kind of everything, really. It’s not a Pete Tong on a Friday night mix. It’s inspired by original hip-hop mixes like Double D and Steinski, Coldcut, Big Apple Productions and Grandmaster Flash And The The Wheels Of Steel. It’s like a journey through my inspirations in music – old skool hip-hop, a couple of dance tracks, it’s just good shit. I mean, it’s only a mix album. I’m not trying to blow it out of proportion to be something fucking amazing. It’s only other people’s music.”

So you’re not going the ’big up yourself, essential selection in the area’ route?
”I think DJs aren’t stars. That’s my philosophy. They’re only people who play other people’s music. I’m not saying it doesn’t take talent to build a crowd, but I’m fucked off with the amount of recognition DJs get. I mean you always get like ”Vasquez, best DJ in the world” and all this shit, but people forget what a DJ really is, on the hip-hop side of things – DJs who have real skills like the Skratch Picklz, people with skills on the turntables, not just mixing records in a club. Hip-hop DJing and turntable skills is what this mix is based on.”

While we’re talking retro, have you noticed a weird ’80s revival going on our there?
”Yeah, I have, as in the original ’80s acts coming back. Is that what you mean?”

After the ’80s revival do you think we’ll have a rave revival?
”Hope so, yeah, man. ’Cos we’ll be fashionable again.”

But you’re fucking massive.
”I don’t think we’ve ever been that fashionable really. It’s weird with us – we’ll always have core fans but I think we’re one of those bands that gets to a certain size but can’t get any bigger. I don’t want tomake records that appeal to everyone. I wanna make records that slam the lines in between the generation gaps. That’s what we stand for. My dad can listen to Oasis and the Verve and like it – they’re great songs, cool, it’s lovely – but for us it’s important to be locked onto your culture and be on that tip.”

Is it your nightmare to be the U2 of dance?
”Ha! Um, no, not really nightmare. I guess we are, aren’t we? But we have worked fuckin’ hard, been everywhere.”

Now that you’re a global superstar you must be getting stalked...
”When I lived in Braintree there were these two girls from Germany, they camped outside my house in their car. The whole car like a shrine to the band. It was pretty freaky. Pictures of fucking Keith plastered all over the roof and the dashboard. They were there for like fucking two weeks, sat outside every time I came out. The scariest was one who thought he was my brother. He came backstage at one of the gigs in the States and was convinced I was his brother, Steve. He kept on and on to the point where we’re walking out to the car park and I was getting really fucking wound up, picked a bottle up, I’m like ”Get this fucking guy away from me.” But it’s nothing like Jay Kay gets. Luckily we’ve moved to the country, where not many people know where we live. Before I lived right in the town and people would stop at my house on their way to college, people like knocking on my door: ”Yeah, I went to Our Price and they haven’t got your album. I wondered if you’ve got any albums I could buy.” You know, fuck off – I’m not a shop.”

Have you ever felt unhinged by success, or started feeling superhuman?
”Success is a weird thing. Every now and then everyone likes to feel like a rock star, every now and then you go out and feel like you’re 10 feet tall, walking round and fucking larging it. Me, I come home and watch EastEnders. It brings me back to earth.”

What next for the Prodigy?
”I’m not doing another album. Didn’t you hear?”

I heard that, but I haven’t heard it from you.
”I’m still not doing it until I’ve got six tracks. It’s not worth saying to everyone ”Yeah, there’s another Prodigy album” until I’m exciting about something, ’cos at the moment I’m not, so I’ll just go away and get some inspiration. If I start writing tracks and they come out like ’Firestarter’, there’s no point. I won’t carry on. Keith has got to feel like he’s progressing on his vocals, which I think he has already, with the new lyrics he’s starting to write. The music has to go somewhere else.”

Have you considered collaborations?
”Umm, there’s a few people I’d like to collaborate with, you know. I’d really like to do a track with Brian from Placebo.”

Of course, Bryan Adams is out there at the moment working with people...
”Yeah, he’s great, really good. Him and Keith on a track, imagine that. What do you think?”

Erm...
”I think Keith’s more of a Kenny Loggins fan. He’ll be looking to do that, and maybe we’ll get Kenny G on saxophone.”

Loggins has got to be looking for work.
”He’s bang up for it.”

You read it here first. DANNY PLUNKETT. The Prodigy Present The Dirtchamber Sessions Volume One is out on XL Recordings in February.” 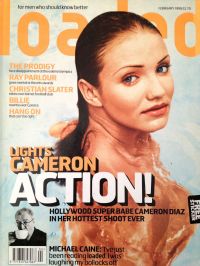 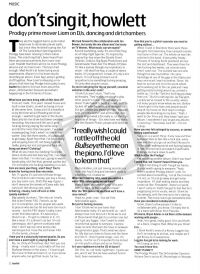 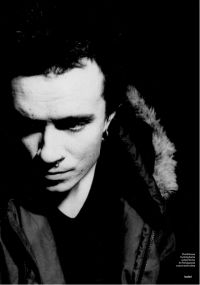