In the Big Day Out backstage area...
the Prodigy are having a little party. Nonchalant industry bods try hard not to look impressed as a boombox outside the band's trailer blasts an ear-splitting murky breakbeat. Cheeky Keith Flint zips around and jokes with the members of the inner sanctum, while a neatly dreadlocked Maxim (whose wife only weeks ago delivered a second baby son) seems to float slowly, oozing quiet menace. The air is already thickening with anticipation. Clearly, they are revelling in this six-date Antipodean jaunt.

Liam Howlett, manwhile, is affable but business-like. Leading Q inside The Prodigy's trailer where the members of the entourage are sitting, drinking and chatting, he's nothing if not forthright.

"Right," he says. "Interview. Everyone out!" Immediately they all vacate, smiling politely as they go.

Flint suddenly appears in the room with a stranger. "This is the Good Doctor," he says to Howlett. "He's gonna talk to me about my personal stuff. You can stay, but your man here's got to go. " After a short conflab, Howlett leads Flint and "the Good Doctor" out of the trailer to another spot. Then Howlett ambles back in, offering a bottle of imported German beer.

These festival appearances - aside from a couple of European dates in 2001 their first major live assault in three years - have done plenty to fuel anticipation about the follow-up to 1997's The Fat Of The Land. "I've got no interest in talking about the direction of the album because it's only half done and it could go anywhere at this point. " Howlett declares. "It's on its way, it's all positive, do you know what I mean? Everyone's getting all anxious, but it doesn't fell like that to me. I've only been working on the new one for five months. It'll be ready probably in about six months' time. "

"Borrowing from a new composition (which will go un-aired tonight), the album's working title is, famously, Always Outnumbered, Never Outgunned.

"In the time we've been away nothing has taken our place," Howlett states. "When we play live we still keep an eye on what's going on with different bands and we still feel that we're relevant. It's pure, out-and-out, full statement... always outnumbered, never outgunned. Who could match our power?"

Their power is very much in evidence tonight. The set opens in the now traditional manner with an offstage voice screaming, "Who wants it?" The Big Day Out's wearied masses have partied through a hot, dry 10 hours of music (New Order, White Stripes, Aussie stadiumfillers Silverchair) but htey're immediately re-energised. As drummer Kieron Pepper beats down on Music For The Jilted Generation's Their Law, the kilted Maxim prowls the stage in big white boots. Manwhile, Flint (with the legend "slut", written along his forearms) scowls, sprints from side to side and generally terrorises the front rows with mock-menace.

The impact is undeniable. Flint and Maxim's Firestarter-style instigation more than makes up for the absence of "dancer" Leeroy Thornhill, who left the band in 2000. Even Howlett attacks his keyboards with the malice of 10 Johnny Rottens.

In this sharp, one-hour set, the band unveil four new tracks (plus the older Benny Blanco) or, as Howlett terms them, "making ofs". Trigger pitches Flint's geezer hip hop vocals into classic Prodigy depth charges and unrelenting beats. Slower, yet with a shivpacking edge, Little Goblin comes over like some kind of savage striptease number, with guitarist Jim Davies (back in the fold to replace Giz Butt) cranking out the vampish riff.

Davies also lends a punk edge to Nuclear, the band's most upfront nod to Howlett's beloved Sex Pistols. To say it rocks as hard as Firestarter or Smack My Bitch Up is no exggeration. Less successful is the Flint-penned / Howlett re-written Baby's Got A Temper. Shuffling around, the crowd attemps to come to grips with this less beatdriven, more downtempo mix of lurid samples and though guitar. The set - and the Big Day Out tour - ends with the twin attack of a slightly reconstructed Firestarter and a potent Fuel My Fire. The crowd are bruised but insatiable, some of them bodyslamming wheelie bins amid a sea if crushed cans. 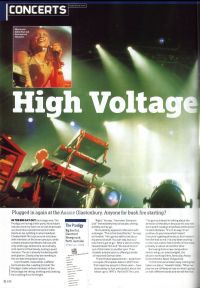 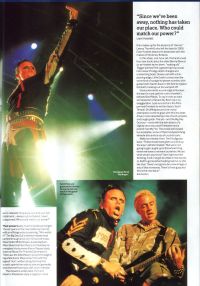