Anarchy in the UK

IT TAKES a while for people to notice, but then suddenly you see the looks on their faces change. Another sell-out audience is winding itself up for the arrival of the greatest live band on the earth, The Prodigy. Whisles are blowing and banging techno, neatly spliced with The Clash and The Sex Pistols, is keeping the rave kids dancing while the rock fans - still   outnumbered but steadily increasing their ranks - lurk near the bar. In amongst it all stands Liam Howlett, the genius behind the music that drew them all here, just checking out the night's vibe.

At first, they're not sure if it's him or not; they nudge each other and try to look round without staring. Eventually they're sure, and a few of them drift over. The first lot are cool, they ask when the new albums coming out, mention a few favourite songs, then wander off. But then some pubescent girls, the legacy of The Prodigy'spop past, get all over excited and Liam disappears backstage to get away from them. It's hard to know what's more remarkable - the fact that Liam was out in the crowd at one of his own gigs, or that he managed it for so long without getting recognised or hassled. It's a luxury he seems keen to hang on to.

OF COURSE, this probably wouldn't happen with the rest of the band. Their new punk rock guitarist Gizz Butt can only get away with it for so long. Leeroy, their six-foot-something dancer, and frontman Maxim Reality - he of the rattlesnake eyes and silver teeth - are both instantly recognisable. And then there's Keith Flint. So much the public face of the band that most magazines call him Keith Prodge, he's been in your front room, scaring the pants off your granny, sneering and scowling at her from some darkened underground tunnel. He is, in fact, the Firestarter.

But what exactly is it like to be the most recognisable rock star in Britain? Rumour has it that Keith freaked out when 'Firestarter' crashed into the charts at Number One last March. How does he deal with it now? "It's a pain in the arse sometimes, but I'm not really bothered," he shrugs, igniting a potent spliff in one of Reading Rivermead's dressing rooms. "Sometimes people like to show how into it they are, but if they get too excited I can't relate to it, and I'm probably not polite about it. ""If someone starts talking shit and bouncing all over you, you just think, 'It's doing my head in, I've got to go'. I can't deal with that. They're like, 'What can I say next to keep it flowing?', and they talk your fucking nuts off. ""But I think our fans sort of respect us," says Liam. "If they know the band, then they know that we're not the sort of people who appreciate all that shit. Most of the people who come up to us are sensible and just go, 'Oh nice one', and that's it. "

What do you think of the clones? I've seen quite a few green-haired 'Keiths' on this tour.

"I don't know how to take that," replies Keith.

"I laugh," grins Liam. "Especially when you see the little kids. They never get the hair quite right. But there was a funny one the other day; people don't recognise me, which is cool, but they recognise Keith, and these people were going, 'Look at him, he thinks he's the Firestarter! He thinks he's Prodigy Man!'. "

IN FACT, offstage the Firestarter is nothing like you'd expect him to be. Rather than blow-torching anyone who crosses his path, before the show he wanders around amiably chatting to people, toking on some potent weed and chilling out.

"I'm really pleased that I'm quite mellow in myself, 'cos I think that's just as shocking for people 'cos it's confusing," ponders Keith.

"They're almost sitting there waiting for me to explode. But that's me - and what I'm like onstage, that's me too. " "It's like when people say, 'Tell me about your image'. Well, it's just me. I didn't design it for the band, but the band allows me to do it. Anything I do now is for the band, 'cos the bands my life. But I don't do it for the band in the first place, do you know what I mean? Like, if I had another tattoo it would appear onstage, but I'd be happy to have it under my sleeve for the rest of my life. "

In many ways, The Prodigy seem to have captured the 'live fast, die young' spirit without having to kick the bucket to prove the point. The vibe, quite rightly, is live for now. But what about the future? Will there be a Prodigy in 10 years' time?

"But whether The Prodigy will be what you're seeing now or something in a different form, who knows?" considers Liam. "I'll always be into music, but you can't say if The Prodigy will even be here next year. "

"I sometimes look at the bands who've split up and think, 'Why the fuck did they split up when they were so fucking good?'. I know it's slightly different, but with Nirvana, when Kurt Cobain killed himself, you thought, 'How could something that fucking good go wrong?'. We're all buzzing at the moment, but who knows, it could all go wrong. Let's just have it all now!"

HAVING SAID that, The Prodigy are doing a damn fine job of staying in control. Despite enormous pressure when 'Firestarter' hit Number One, they refused to do 'Top Of The Pops', Now that the new single, 'Breathe', has also stormed to the top of the charts, the same rules apply.

"We're not doing any telly," affirms Liam. "We just said bollocks, because we like to use everyone else's mistakes to improve our own thing. You know, just watching other bands on telly and seeing how shit they come across, because you can't project yourself the way you want on TV. "

"If the cameraman thinks he's on a flashy day, you've got no control," agrees Keith. "And BBC soundmen think they're the gods of sound, so they broadcast the music the way they think it should sound. "

"The videos are there to project the band, so are the live shows and the festivals," says Liam. "I reckon that's all people need really. I don't think people need to see us on telly talking about a load of shit when they've got the music to listen to and the videos to watch. People can have too much knowledge of a band too quickly. "

Does is concern you that you might be seen as aloof and distant because you don't do to many interviews?

"I'm not gonna start doing loads of interviews because not doing them helps me to write music," shrugs Liam. "If you know everything about the band it becomes too predictable, and you know what type of songs they're gonna write. "

Liam is currently writing new songs. One new Prodigy track will feature Skunk Anansie's Skin on vocals, although you may have to wait a while to hear it. Liam sent Skin a tape of the music and she wrote a set of lyrics that, according to Howlett, "changed that particular song into too much of a pop song".

"The vocals are wicked," he adds, "but I need to write another song for them. I've put it on hold for the moment until I've thought exactly what I wanna do with it. "

Some of the other collaborations Howlett has involved himself in are even more bizarre.

"One of the tracks on the album I'm doing just for something completely different," he begins. "It's a collaboration of Kula Shaker, something really psychedelic. It's  only with their vocalist (Crispin Mills), not the whole band, and it's gonna be one of those tracks that's a complete contrast on the album, like '3 Kilos' off '…Jilted Generation'. "

GOD KNOWS when the new Prodigy album will actually be finished. Initial rumours suggested May of this year, then September, and now it seems like January '97 is a distinct possibility. You'll just have to wait.

Right now, only one question remains. Are The Prodigy really the punk rock band of the '90s? Enter new guitarist Gizz Butt, a man fully qualified to give the definitive answer, since he's served time with the UK punk veterans The Destructors and the English Dogs.

"The best punk gigs always had an underground intensity and a dangerous feel to them," he reckons. "And Prodigy gigs have always had a positive euphoria with a compelling link to the underground. It feels so right!

Don't forget, The Prodigy were, first and foremost, a dance band, and it was  the integration of other ideas that has given birth to what is ultimately a modern punk band. " We'll take that as a 'yes'. Keith?

"Only if it's because of the excitement of punk, and because of the fact that it was quite an original scene that just sprang up and exploded," he shrugs.

"Punk rock is an attitude," concludes Liam. "Our attitude is, 'Here we are, you can fucking take it or leave it'. If that's punk rock, then we're punk rock. "

"We just do our own thing. Of course people will look at Keith and Gizz and say, 'Well, they've got a couple of dudes with spiky, coloured hair', but that's just the  surface, and that's just fucking shit. People have to look deeper, look at what we've done and what we're not doing, like all the TV we've turned down. And the attitude of the band - the music, the things we take risks with. To me, that's what it's all about. " So never mind the bollocks, here's The Prodigy.

BUTT-HEAD SPEAKS!
The Prodigy's new guitarist Gizz Butt has a long punk rock history, playing in bands like The Destructors, Wardance and English Dogs.  He was used to playing small, snotty club gigs. So what's it like when you first gig with your new band is in front of 50,000 people at Glasgow's T In The Park Festival? "I was super fucking sharp, as it goes," insists Gizz. "I checked afterwards and I'd managed not to shit my pants. " And what's the most mental thing he's seen with The Prodigy so far? "Every bleeding gig there's something going on," he hoots. "But five of us on billboards being chased by the police " 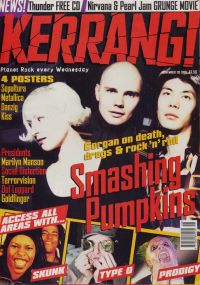 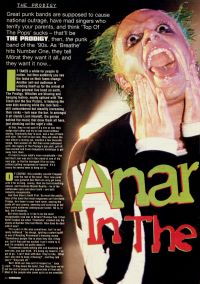 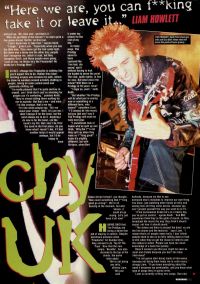 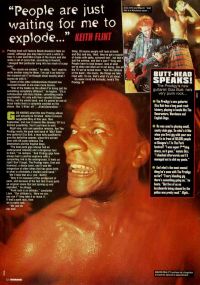