Review by neko:
Our flight to Melbourne is at 11am, so we get a bit of time in the afternoon to go to St Kilda beach. It’s a hot day once more whereas apparently back home it’s still snowing! Tonight is already the last show in Australia and I can’t quite believe yet that this is going to be over so soon. I don’t want to leave!

It’s a late show tonight, again as part of Two Tribes festival in the massive Melbourne Olympic Park. This one’s a rather big one, with about 6 stages and Prodigy playing the biggest one of them, looking like something of about 5k capacity.

We get to the venue at about 11pm and, bloody hell, it’s crowded. It’s all a bit chaotic and access to the arena where Prodigy are on is already very restricted. Once inside they dont really let many people down to the standing area anymore (we of course make it). Looks like the doors are locked now and already 45 min before Prodigy are on no one can really get into the arena anymore. Try and stage a 20k capacity event around one live band in a 5k arena and you’re obviously in for trouble and the shit will hit the fan eventually (or was that after the show? ha ha).

The event tonight itself is actually pretty cool. First one of the Two Tribes festivals I actually like for the festival itself, cool crowd and a cool DJ on before Prodigy. Almost seems like a whole festival organised around the Prodigy’s show now.

So we’re getting near midnight and you can feel the anticipation in this large arena tonight. As at all shows lately, the intro to the show is Primal Scream’s Exterminator. Cool. I’m still excited like a little child everytime before the band come on. I may have met them all a couple of times and seen them play many gigs before, but the minutes just before a gig and having the band as a collective up on stage is still the most exciting thing in the world for me.

So, the show starts with Wake Up and this is actually followed by a new fill I haven’t heard before. This is of course very cool. And as much as I loved this tour (as a whole experience maybe even my favourite ever) there hasn’t been that much of the unexpected and new stuff. The whole Kool Keith thing more than made up for this of course, but it’s just nice to hear something new, even if it just lasts 20-30 seconds.

It’s a good one but Adelaide was more intense and the festivals just cannot live up to the three amazing solo shows. It’s always hard to grasp such a large venue and Keith and Maxim are doing it really well. At some point Maxim runs right through the crowd, up the stairs and into the seating area, where he remains for a whole track, well appreciated by the fans up there. The band are definitely very well received once more! 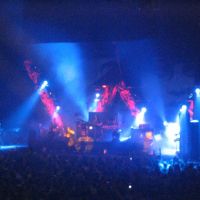 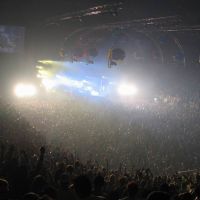