Review by Spoz:
“*burp*.. oi oi oi.. fit a medium size walrus up ya colon and recite the aramaic alphabet backwards in phonetic burps.. oi oi oi.. arr fuck..
yeah.. so, it’s 3:15AM.. I’m back home, talking utter shite in a prodigy forum.. WHY..? coz I went to a fuckin’ prodigy gig ya dumb sluts.. HAR HAR HAR.. and yeah.. obviously.. I’m still fucken destroyed drunk.. waahEEEEEEEEEEEEY!! so, fuck yo dog up.. take 2 tablets and call me in the morning.. (no, probably best ya don’t.. seriously.. wot the FUCK ARE YOU DOING WITH YA DOG?? HUH?? FREAK!)
(ahem)
so.. here’s some details..
there were no real surprises… if you’ve seen the setlists from previous Australian gigs.. it’s pretty much the same shit..
started with WAKE UP CALL
followed by..
THEIR LAW
WARNING
BREATHE
SPITFIRE
MINDFIELDS
GIRLS (+ MORE GIRLS)
FIRESTARTER (remix style)
BACK TO SCHOOL
they fucked off.. came back for an encore
POISON
SMACK MY BITCH UP
OUT OF SPACE..

yeah.. might’ve missed a few tracks.. and the order’s not exact, but arrrr fuckit.. wot do I care.. I’ll give ya more accurate details later (y’know.. to please all those trainspotters out there.. ya FUCKS!! HA!!)

I got photo’s.. some of them real kickarse.. not really as good as them ninja photo’s from the SYDNEY gig on the Triple JJJ site (coz holy FUCK those shots rock).. but yeah, still some cool as fuck shit..

I would’ve got much more photo’s.. but them arse licking twats(translation: security) kept grabbing people with camera’s and stopping ’em taking shots.. and there’s KEITH.. wobbling around right in front of us.. arms flailing around like a moron.. making “frame” shapes with his hands.. begging to be photographed.. and the security kept stopping us..
so.. yeah, I snuck photo’s when the yellow t-shirt bitches weren’t looking.. the fucks..

oh.. I also got some video footage.. the video itself rocks.. but the audio of it likely licks balls.. coz being 2 peeps from the barrier, the bass would’ve killed everything..

I also managed to sneak me iriver MP3 player into the gig.. recorded the ENTIRE set.. with a mic wired up to me collar under me t-shirt, like I wuz trying to FBI the MAFIA or sum shit.. I had a listen to it on the pisshead late-night BUS home.. and, maybe 25% of it is cool… but yeah, once again.. the spastically loud bass pretty much destroys the rest..
if you want the sound of a pig explosion in a sawdust factory.. with a fucking LOUD fuckwit.. screaming insults at Keith Flint “OI.. YER A FUCKING MAAAAANIAC!! OI BITCH.. GET A DOG UP YA!!.. FIT A WALRUS UP YA!! AAAUAUAUAUUAA!!” (yeah ok, that wuz me).. then sure.. I’ll upload it.. (once again for all you trainspotters.. seriously.. start ya OWN fucking band ya sloppy fucks.. stop bugging me.. stop hanging outside me house at all hours.. begging me.. “DUUUUDE.. DID THEY PLAY THE OSAKA FILL.. DID THEY?? HUH? HUH???”.. yeah.. like I give a shit wot YOU feeel.. HA!
(ahem.. don’t mind me.. I’ve had over 10-12 beers tonight..)

yeah.. so, they went foookin’ OFF.. the crowd went fookin’ NUTS.. I managed to shake KEITH’s hand.. he got some action with 2 chicks in front of me.. MAXIM wuz a fucking lunatic.. I think I might’ve scared him.. coz I wuz crazier than he wuz.. LIAM pounding his fist in the air, like he thought he wuz AC/DC.. the stage setup felt a lot smaller than previous gigs.. more compact.. more intimate.. or perhaps I wuz waaaay up the front this time.. instead of flailing off crowd surfing somewhere in the middle.. like I did at BDO 97, and THEBBIE theatre 98 (till I pulled a fucking hamstring midair.. ouch!)
anywaze.. nufff shit from me..

I’ll post some ninja photo’s n shit here, just as soon as I find a fucking device driver for COPY ONE’s digicam (which I had to borrow coz my camera wuz FUCKED UP..)
so.. stay tuned..

SPOZ shall return, when.. um.. much more sober than this..
(but likely with a nice fluffy + ants hangover to show for it.. )
–end idiot rant–

Review by neko:
After a day to relax we’re off to Adelaide on Saturday morning at 7.40am already. Not sure why we booked so early, probably was the cheapest! Very hot here in Adelaide (over 30 degrees) and not that much to do, so we just chill out a bit. The gig tonight is a very early one, so we get to the venue at about 7pm. It’s another Two Tribes one and we take a little walk around. It’s again your usual dance festival with different stages and different DJs playing. Prodigy are the only live band though and apart from Grandmaster Flash and Armand van Helden earlier on the bill, I don’t recognise any of the names. The people around partly look very stuck in the early nineties, lots of neon clothes and glowsticks, many people looking like fresh from a cyberdog outlet sale! The main area, where Prodigy are supposed to play, is still very empty and the DJ on is pretty rubbish. The band on here in an hour?

So we sit outside a bit and go back in after 8pm. There’s now a special ‘Prodigy warm up set’ by DJ Hyper and he is actually much better than the guys before. Bring back Adam Freeland any day though!

It’s about 10-15 minutes before the band are supposed to be on and now suddenly the place seems to change quite a bit. The room is very crowded now and there’s a very good vibe of excitement and expectation. Everyone is here to see Prodigy and we’re all extremely excited about it, yeah!

At 8.40pm then the Wake Up Intro comes on and now this place looks and feels like a Prodigy gig. Gone is the cheesiness of the event and it all feels right now.

The band come on and start with Wake Up. We’re a bit back on the side and got nice space to dance, so it all feels really good. Now as usual, Their Law, then the old fill and now Warning. The gig tonight is great. Despite what it looked like in the beginning a great audience here actually, almost as if someone had interchanged everything 10 minutes before it started.
Then goes on as usual, with the likes of Breathe, Spitfire, Girls / More Girls, Back to School, all very good tonight. Band are totally there and the audience now is your real Prodigy audience. Firestarter then – I am still not really into this new version too much really. I guess it was a cool thing to come up with a remix, but as a whole it doesn’t really work for me.
But now, Action radar, this is actually becoming my favourite track of the set now, although it is just a fill. The way it builds up is amazing and the live drums are adding just so much to it. None of the live recordings that are around of this do it justice, none even come even close to how hard it is in real. I love the album version, but the live version despite having no vocals, is just very intense, mostly because of the added drums.

For Mindfields then, Maxim and Keith return on stage. While Maxim provides his trademark vocals, Keith in his usual form climbs up and balances along the front row barrier. And now the band already leave the stage again.

Then return, with the usual encore: Poison (with release yo delf fill), SMBU and then some intro beats leading into Out Of Space.

So, all in all it turns out to be a rather good gig! Probably my favourite of the Two Tribes gigs. 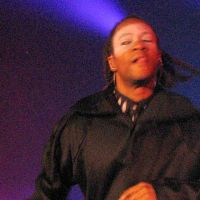 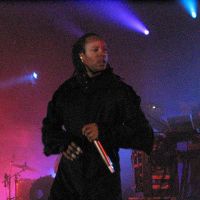 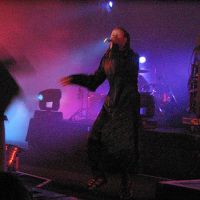 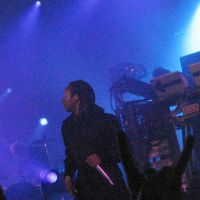 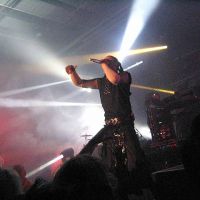 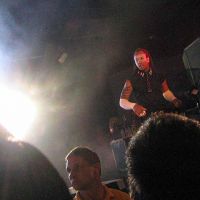 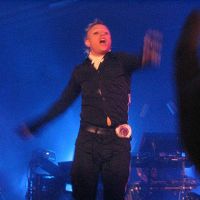 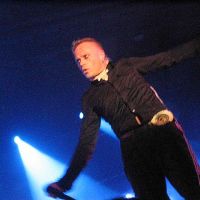 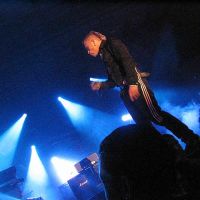 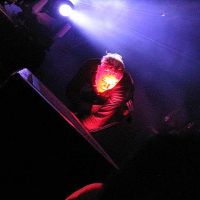 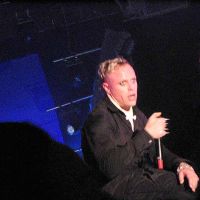 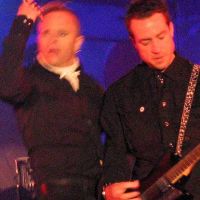 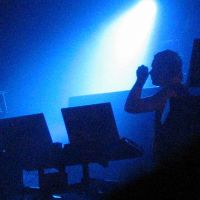 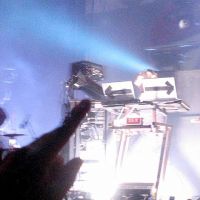 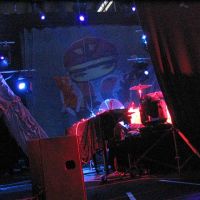