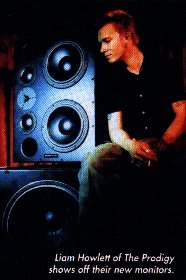 Liam Howlett of The Prodigy shows off their new monitors.

Dynaudio Acoustics have released a new sub-woofer specifically targeted at the burgeoning 5.1/multi-channel surround sound market. The BX30, as it is called, is a development of the popular ABES sub-woofer unit, launched four years ago, which is now in widespread use in many recording and audio post-production facilities. The new BX30 is also equally at home as a sub-bass unit in smaller project studios where the nearfield monitoring needs an extension to its frequency response and power handling. Crossover electronics are incorporated into the design, along with a 140W power amp, and the unit can handle frequencies down to 22Hz. The UK list price for the BX30 is £1510 including VAT.

Techno funsters The Prodigy have installed a Dynaudio M3A monitor system, complete with two custom-built sub-bass units, in their new private songwriting studio in Essex. The Prodigy are currently using the studio to prepare tracks for their next album -- a follow-up to last year's million-selling The Fat Of The Land. The Dynaudio monitor system incorporates the new XTA 226 digital 2-input, 6-output crossover, Chord 1424 and 612 mono block amps and the new DCA 1250 amp. The installation was carried out by Nik Clarke, head of technical sales support at studio design consultancy Munro Associates, with Kevin Walker and Iain Beckham of Unity Audio.

The Prodigy's Liam Howlett, who is responsible for the band's songwriting, chose Dynaudio Acoustics M3A monitors because he wanted loudness, true clarity and a fantastic bass response: "I was totally blown away by the sound quality of the M3A monitors. I was really impressed by their depth and clarity, particularly at the bottom end, and I wanted a system with enough power to provide a club vibe, but accurate for mixing. "