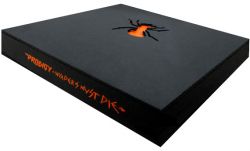 In 2009 The Prodigy were proud to announce the release of their long awaited official photographic book documenting their 2008 and 2009 journey on the Invaders Must Die world tour.

The book contains over 350 pages of exclusive stage and backstage images with never seen before shots of the band from around the globe.

Luke Insect (who created the Invaders artwork for the album and the whole campaign) designed the book in collaboration with the band. Brilliant photography by Paul Dugdale, Rahul Singh and others, combined with cutting edge design produced this collectable masterpiece.

This high-end quality book is a 12 inch by 12 inch hardback, printed on 157gsm matt art paper. There are six sided triple page pull outs and over 500 photos in full colour and black and white.

The book has been inserted into a black embossed and die cut outer sleeve for the perfect finish.

There are only 999 of these individually numbered books in print, no more will ever be produced.

Every book has been personally signed and numbered by Liam, Maxim and Keith as well as Luke the book designer.

A really cool 12" hard cover color book for die hard fans! The price of the book caused loads of uproar among fans when the book is available for pre-order. It was only available trough the Prodigy's online store and the price was £99 + shipping by courier delivery (£40 to Europe). It's limited to 999 copies and the quality is nice so I really don't think that the price was too much although the shipping charge was way too expensive.