So this is how the world ends. Not with a bang, but...

...With 45 bangs, 97 thunderclaps, 128 kabooms, 408 nuclear explosions and a million blinding supernovas erupting somewhere inside your head. It's Armageddon time in Prodigyland and the four raving mad horsemen of the Apocalypse - Liam Pestilence, Maxim War, Leeroy Disease and Keith Death - are here to show us that the coming Summer of Destruction is going to be one hell of a blast and, quite possibly, the scariest thing Glastonbury will ever see.

Is this really how the future's going to be ? Well, the time is ripe, let's put it that way. Just as Pulp were the perfect band to capture the mid-decade optimism of 1995, so The Prodigy are ideally suited to reflect the chaos that's recently afflicted Britain's Strangest Festival. WE still don't know the real reason why Glasto was shelved last year and, now that Michael Eavis has failed to become an MP, the centre for ley-line lunacy and all-round hippy mayhem is shaping up to become a seething mass of pre-millenium tension.

So, The Prodigy's appearance at Madrid's aptly named Festimad - and yes kids, it's bonkers with a side order of barking to go - assumes an added significance as a Glastonbury warm-up. And, watching 100000 Spaniards go doolally in a space the size of the Pyramid field, you feel one overwhelming emotion : fear. This is the first time the locals have managed to freak out and show their appreciation since "Breathe" was Number One for nine weeks in Spain, and there are going to be plenty of post-"Firestarter" fans in the UK who feel the same. If not more so.

Here's what to expect, then. Somewhere in the distance, four little mini Prodigy blokeswill be bouncing around like hyperactive munchkins, almost out of reach and out of sight. You'll be able to spot Keith, of course, as he'll be wearing the same yellow "Dirty Dozen" T-shirt he's been wearing for the past year (a gift from an Australian female 10-pin bowling team, apparently).

And Leeroy will always be head and shoulders above most performers, literally. But, if you're after the visual extravagance of the previous tour, then forget it. This is the raw experience.

Not that Liam and chums will appear any less vital and energising. The electricity surging from the stage and zipping through the crowd will make sure that theirs is one hour and a half that passes by in a thrashing, delirious daze. Tonight, each time the percussion kicks in and the big beats start raining down on the faithful like fire and brimstone, you can sense a collective buzz that's bigger than a mere Big Pop encounter. Even the language barrier makes no difference. Maxim's exhortations to "MOVE AROUND" may fall on uncomprehending ears but, as soon as the groove starts, the message is rammed home loud and clear. Time to give up and lose it.

Maxim actually turns out to be the star of tonight's show. Keith does his pit bull-on-heat impression brilliantly while Leeroy displays the bounce of the Amazing Elastic Man from the Fantastic Four, but it's Maxim who rules the roost. He's your worst nighmare: a Mr Motivator on steroids who somehow manages to charm everyone into joining his strict callisthenics regime. In fact, the way he leaps and shouts and laughs and acts like a rabble rouser at a cup final is so compelling that you watch him at the expense of everything else. Even when you're dancing like f***.

You'll know the setlist if you've seen The Prodge recently - the same old surefire mixture of raging belligerence, pounding determination and wired euphoria. The opening tune with the vicious potency of a jack-in-the-box boobytrapped with dynamite is called "Smack My Bitch Up", you'll be pleased to hear, and it's slated for the new album. The same fate awaits the busy breakbeat shuffle of "Funky Shit" and the bouncing doublebeat madness of "Minefields". But the only thing that really matters here, now, is the affect they're having on the screaming, way-past-understanding crowd.

All of which brings us back to that feeling of pre-millenium tension. These are dark and upsetting times and, as society fragments into tinier segments, it takes a rare phenomenon to create peer pressure among people with hardly anything in common. That's what's happening here, though. The "punk rockers, hip hoppers, pill poppers" who Maxim shouted out to at the start are setting aside personal defferences and letting themselves be swept along by the sheer communal feeling. And, for all their chaos and insanity, The Prodigy in 1997 are the only band who make any real sense. 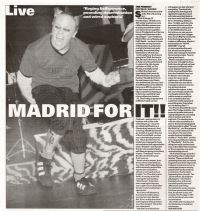