This article was published in 2005 but the exact date is missing. Please contribute if you have more info. 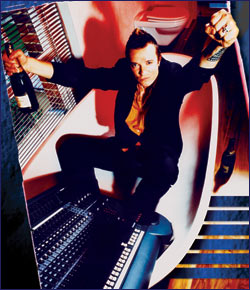 A little faith can go a long way. Prodigy is now one of the world’s biggest acts, and main man Liam Howlett’s faith in a few key things is one of the magic ingredients that got them there.

There’s his faith in his music—music that consistently stays two steps ahead of categorization. In the span of three classic albums and a brace of smash hit singles over five years, Prodigy provides the soundtrack for a generation that launched itself with an illegal party—taking that raving sound to the rest of the world.

There’s his faith in the team around him—dancers, MCs, vocalists, friends—that gives his music the visual dimension to carry it to a global audience. Liam is striking enough at the helm of his on-stage audio workstation, but with the stage electrified even further by the presence of Prodigy performers like Keith Flint, audiences are universally ignited.

And then there’s his faith in a handful of professional music production tools. Modestly, Liam does not classify himself as an expert sound engineer, even though he’s written, produced, engineered and recorded the whole of Prodigy’s legacy himself–and mostly at home, in a series of textbook project studios. From bedroom to mansion, a few technological partners have never left his side, and one name is at the center of every decibel.

Liam first came across Mackie mixers in a music shop in Essex. Appealing naturally to a teenage MIDI music-maker living at home, the Mackie CR1604 mixer was procured, practiced, and put through its paces on the first Prodigy releases—including the epoch-making debut album Experience, in 1992. “The equipment we used in the studio then was the same equipment we used live, because we didn’t have enough money for both,” he recalls. “It all sat in flight cases in my bedroom. The first mixer was this really heavy, wedge-shaped thing—and was a real problem on the road. I checked out the Mackie mixers at my nearest dealer, and came across the 1604. Later on I realized just how good it really was, but to begin with I got it because it was a good price—and reading a lot of the magazines, it seemed to be the mixer that a lot of people were using for dance music.”

“When I got to grips with it at home, I realized that you could really push the channels and get good distortion.” And it helped push Prodigy’s second single, Charly, into the UK Top 3. Charly’s techno breakbeats defined the era, and at the same time transported Prodigy from the underground to the mainstream.

Liam’s sound continued to expand. Soon there were two more groundbreaking singles, One Love and No Good (Start The Dance), paving the way for the rockier energy of second album Music For The Jilted Generation. The mixing platform had stepped up a gear, too.

An Analog 8-Bus continued Liam’s relationship with Mackie. Poison notched up as Prodigy’s ninth consecutive Top 15 single, the royalties were piling up, and Liam found he could book any studio he wanted. But he didn’t. The third album, Fat Of The Land, entered both the UK and US charts at Number One in July 1997—yet Liam had held on to his home-grown values. “We spent time in a commercial studio, but it couldn’t capture the same vibe. In fact, we made all the tracks for Fat Of The Land on the Mackie 8·Bus, and then we tried to go into the studio to mix. But we ended up back at my place, and I did the whole thing on the 8·Bus.”

In particular, the incendiary single Firestarter, and its platinum sequel Breathe, prove the point better than anything. “People are always coming up to me and asking how I got so much attack into Firestarter, and it was largely down to the way you can push those Mackie channels. The mixer was the key to that sound.”

Fat Of The Land went on to sell 10 million copies worldwide, and Liam has upgraded from analog to digital by acquiring Mackie’s Digital 8-Bus console. “I’ve been experimenting a lot with the D8B’s morphing feature,” he reveals. “Especially on bass sounds. I’ve actually used it on a few underground vinyl releases, which I put out under a pseudonym. I won’t tell you what they are—that would spoil the vibe…”

Morphing allows you to smoothly change from one EQ setting to another. When you’re ready, you can trigger the console to transmogrify from one setting to the other, changing each detail bit by bit in a sweep. And you can vary the time it takes to do this from a split second to a slow, writhing morph over 8 or 16 bars. Unlike a cyclical effect, like flanging, each parameter manipulation is unique and completely dependent on the user’s imagination.

As a very hands-on, vibe-driven musician, Liam executes his morphs manually, rather than by automation—although the feature is available via automation too.

Liam also experiments with the D8B’s own impressive suite of third party plug-ins as well, which include analog modeling effects from Acuma Labs, parametric EQ from Massenburg, TC Electronic’s TCFXII reverb, and a dynamics package from Drawmer that encompasses gating, compression, limiting and expansion. “The Acuma stuff is great to play around with and experiment as you’re developing ideas.”

For nearfield monitoring, Liam has consistently stuck with the pair of Mackie HR824s that he picked up when they first appeared in 1996. In fact, they were the monitors on which Fat Of The Land was mixed—marking out a telling juxtaposition between the compactness of the speakers and the gargantuan impact of Richter-tickling single, Firestarter. “I love the Mackie nearfields,” he says. “I even had an extra pair to go with some decks I had set up, so I could get a really accurate reference to vinyl. I can go into another room and get that perspective immediately.”

The ‘90s will go down as the era in which bedroom musicians became very, very successful. They may even go down as the First Age of Mackie. But they will certainly be remembered for Prodigy, who became a big noise in the world with a little help from some friends.