Following the sad news of Keith Flint's death, former Prodigy guitarist Gizz Butt remembers his time with the singer at the peak of the band's fame. Photos courtesy of Gizz Butt. 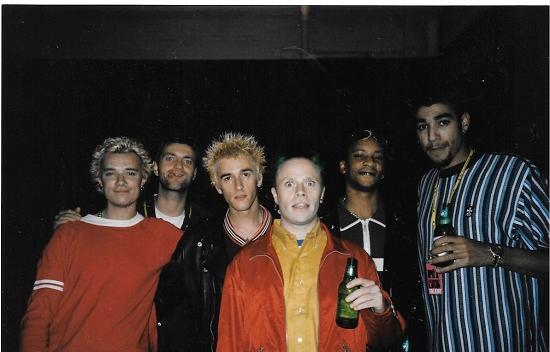 Keith Flint, The Prodigy and John Fairs on the set of MTV's 'Fashionably Loud'

The sad passing of Keith Flint, The Prodigy frontman this week at the age of just 49 prompted a flood of tributes that have affirmed his status as one of the definitive creative forces of a generation. His magnetic, often transcendent presence as a performer has been rightly exalted by many in the last few days, but so too has his humour, his kindness and his common decency; his qualities as a man, as well as a musician

Gizz Butt was The Prodigy’s guitarist at the height of their fame. Within two months of auditioning for them he was playing with the band at T In The Park; the footage of that gig remains almost agonisingly intense, with Flint at the absolute peak of his phenomenal powers. “It was so brand new and so beautiful,” he recalls to tQ. “You felt like he was in this huge, primitive energy. Watching it on a video is one thing, it's really great, but when you’re on stage with him it’s even greater. Looking into his face, Keith on stage, he was something else. I remember coming off stage and me and Keith just jumping into each other’s arms. It was just beautiful.

“My head’s just been spinning really, I’ve been thinking around in circles,” he says of the days following the news that Flint had apparently taken his own life. “Something like this happens and you just go from one memory to the next. I remember it was Keith that called me on the phone to ask me to audition. I remember he was so down to earth with me. On the audition day I was saying stupid things because I was so nervous. My legs were shaking, I felt like ‘I don’t know these people, they’ve got their in-jokes’, but Keith just went along with whatever dumb things I said. There was no coldness in any sense from him at all, I just had this impression that he wanted it to be good, he wanted it to be right. He wanted it and I wanted it. There was a unity.”

The three subsequent years Butt spent with the band were something of a blur, he says. “It was enormous, when you’re in that kind of situation you want to keep yourself as rooted as you possibly can. There was an energy that I can only describe as being like the world’s strongest magnet, and Keith had to shoulder it; a lot of [that energy] was coming from him. It was something he had to take. He was on the cover of the LA Times and things like that, that’s a big deal. When he was being interviewed people were probing him more than they were probing anyone else. He became notorious but because of all the extra stuff, the add-on things that people get into.” 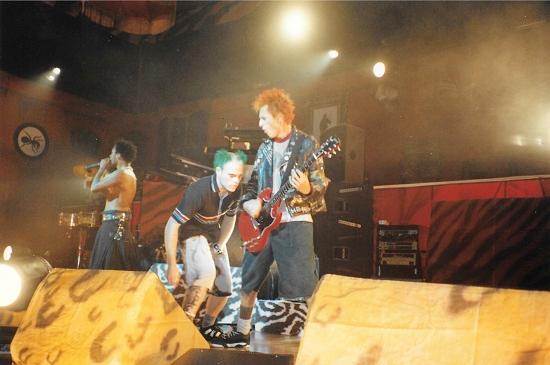 Keith Flint and Gizz Butt performing live with The Prodigy in Newport, 1996

Butt seems to remember Flint in two ways. He recalls the frontman’s stage persona with as much excitement as any fan: “You can’t help and go ‘Wow, where does this guy get this from, the way he moves?’ When you watch Keith you think ‘I’ve never seen anything like this before, the way he’s so animated, nothing’s staying still, his mouth isn’t staying still. I’m not even talking about when he’s singing, it’s when he opens his mouth and he’s drawing the crowd in. He’s speaking and you don’t know what he’s saying! Is he speaking in tongues? What you do know is it’s part of the ritual and the magic, the performance.”

But he also recalls Flint’s friendship with just as much feeling. They had not seen each other for a few years before his death, but there’s a deep affection in his voice as he recalls his bandmate offstage. “He was a great master of pulling a disguise out of the hat. You’d walk into the dressing room and he’d putting a bowl of salad on his head to look like Shirley Temple about to sing ‘The Good Ship Lollipop’. He’d put a mask on and stick a cigarette out of the nostril and do some weird dance in front of you. I had a CD of Joh Shuttleworth’s ‘Austin Ambassador Y Reg’, a ridiculous song, I’d put it on on the tour bus and we’d all start doing this merry dance to it…”

“Keith always payed a lot of attention to detail,” Butt continues. “He got into things, and when he got into them he was meticulous. Where he originally lived in Braintree we went for a walk around the garden and I remember thinking ‘This could be a model village, it could be exhibited, you could charge people to walk around this garden!’ He had a house on the end and he bought the house on the other end of the block and invited all of us round for bonfire night. He had a fireworks display in the garden and Liam was DJing. The house had been gutted, plaster off the walls, only the outside shell. That’s the attention to detail he’d go to, he’d get an idea, remove everything and start from scratch…”

For all Butt’s memories of Flint as a friend and a bandmate, it’s still the frontman’s astonishing abilities as a performer that will remain his abiding recollection. “My most important memories are on stage,” he says. “That magic.”