They're the ultimate rock 'n' roll experience - utterly crazed, terrifyingly heavy and fearsomely intense. They are The Prodigy, and as Mörat explains, they're going to tear your little world apart...  A WILD-eyed maniac called Keith Flint crashes across the stage inside a weird, see-through plastic ball. He  seems utterly crazed and completely out of control. With his flaming orange hair and the set of chains that he's pierced through his face, he looks like a cartoon psycho from an apocalyptic place somewhere between the 'Blade Runner' and 'Batman' movies. As the bass and drums kick in harder, whipping up a tribal thunder that you as much as you can hear, a black guy with the eyes of Satan appears and begins to tear his lunatic cohort free from the ball. The second frontman is Maxim Reality. He turns his mad eyes on the vast crowd. All around, for at least a mile in each direction, punks, ravers, bikers and every other tribe you care tom mention are losing their minds and dancing relentlessly. The atmosphere is so electric you could light up a small city with it; the sound coming up from the stage is so intense it makes your blood boil. This is The Prodigy at Glastonbury.

FOR MANY of us, Glastonbury '95 was where it all started; this was where we saw The Prodigy for the first time. It was the moment when our mild curiosity about the band developed into the kind of respect and fevered enthusiasm usually reserved for bands like Sepultura and Machine Head. The beauty of festivals - aside from the fact that you can get wasted with thousands of like-minded loonies - is that you can check out bands you wouldn't normally pay to see. You might have heard The Prodigy's classic second album, 'Music For The Jilted Generation', you may have been told they were pretty good live, but you probably still hadn't forgiven them for their dire debut single, 'Charly'. And, well, most of that techno stuff's crap,

At Glastonbury '95, we'd watched The Black Crowes play on the Pyramid Stage as the sun went down, and we wandered into another field to check out The Prodigy. The wait was so long that all the drugs and alcohol had nearly worn off, and we were ready to give up and head off to watch something else. Then The Prodigy exploded onto the stage. They were, and are, the ultimate live experience.

THERE HAS been a lot of debate recently about whether Kerrang! should cover The Prodigy in its hallowed pages. The band have followed it; their White Zombie/Pantera-obsessed guitarist, Jim Davis, buys the magazine every week. "Some people seem to be with us and some are against us," notes Liam Howlett, the man responsible for writing most of The Prodigy's music. Doubtless after this, the second feature on The Prodigy, there will be a lot more letters. But before you put poison pen to bog roll, let us state the case for the defence.

Firstly, The Prodigy are not a techno band. True, they're not a metal band either, but then there isn't a name for what they're doing ("I just call it Prodigy music," shrugs Liam). But whatever you call it, it's been progressively heavier and more guitar-oriented, and according to Liam, will continue to do so. Which is why they're about to add an as-yet-undisclosed L7 track to their live set. They're also working on a new track with Skunk Anansie's Skin, while the likes of Fear Factory, Biohazard and Pitch Shifter fall over themselves to get  The Prodigy to remix one of their tracks.  "I'd really like to meet those guys," says Fear Factory guitarist Dino Cazares. "The Prodigy's kind of doing what I wanna do with their guitars. I can't wait to hear what their new record sounds like. "

NOW, YOU might claim that The Prodigy haven't always had this rock a bit handbag - but check out Ministry's  woefully lightweight debut album, 'With Sympathy', if you want to see how a band can evolve from muppets to messiahs. If anything, The Prodigy's gradual transformation gives the band more credibility, because you know they're doing it for real. They don't need to make heavy music. They were doing very nicely thank you very much - all of their singles have hit the Top 20, and their records were selling by the shitload. So why risk going all heavy if they weren't really into it?

"When we first started, we were sort of narrow-minded," says Liam. "We just liked hip-hop and techno. That was, like, 1991 to '92. Then we began doing more college events, where they played lots of types of music, and  we got to hear different, heavier bands. You know, guitar stuff. That's when we started getting into it. "  "We could appreciate the attitude they were giving off," continues Maxim Reality. "We were coming from the same angle, but from the dance side. " Since then, The Prodigy's evolution has been completed  by the addition of Jim Davis, who recruited himself after hearing The Prodigy soundcheck. They've gone on  to play shows with everyone from Sepultura to Rage Against The Machine, Porno For Pyros to Dog Eat Dog.

Now that 'Firestarter' has been a Number One phenomenon, both Smashing Pumpkins and The Presidents Of The United States Of America can cover the song at their gigs, and the whole crowd will sing along. "It makes you laugh, though," says Liam. "Just because  we've been doing a few festivals, the weekly papers are  suddenly saying, 'Prodigy are rock and roll!'. Where the f**k does that come from? We've always been doing what we're doing now; high energy, hard shows. " ROCK AND roll or not, part of The Prodigy's appeal is their relentless enthusiasm. They're so totally into what they do, you can't help but join in. Of course, it also helps that their gigs are ridiculously loud - they literally shook the dust from the ceiling a the Ilford Island last year.

"None of us are up there trying to look good or anything," says Keith Flint, the Devil's own court  jester and a man who smokes spliffs powerful enough to fell an elephant. "We're just having a laugh and trying to coax people into letting go. " And everyone is welcome on Planet Prodigy... "It's a culmination of everyone liking so many different styles of music nowadays," says Leeroy, their  dancer. "It used to be you had to be a mod or a rocker, or whatever, and if you listened to anything else your  mates would give you shit. But if you listen to hard  music, it doesn't matter what you look like does it?" So Kerrang! hasn't gone soft. I've seen The Prodigy play everywhere from vast festivals to tiny clubs, and every time, they're terrifyingly heavy. Ask Max Cavalera or Dino Cazares, and they'll tell you the same thing. And if you really need any more convincing, just member that the 'Firestarter' promo got more complaints that any other video in TV history when it  was screened on 'Top Of The Pops'. Now that is rock and roll. And this is the future. 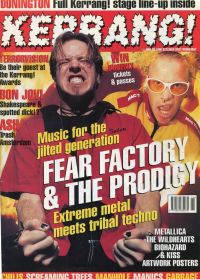 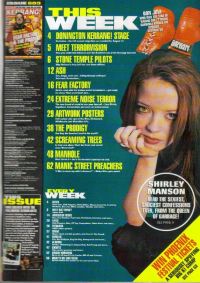 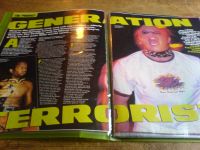 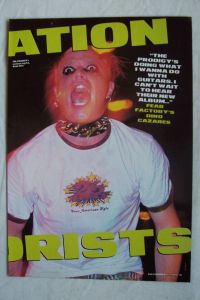