The Prodigy - Invaders Must Die

Five years have passed since the last full-length offering of new material from Essex rave titans The Prodigy, and five years in an industry that turns on the slightest trend is a long time.

Too long a time for most, so ‘Invaders Must Die’ needs to make an impression so sizeable that said five years are forgotten immediately: this needs to transport the listener to a world that doesn’t lose its shit over limited-run dubstep releases.

And, for large parts of its 46-minute run time, ‘Invaders Must Die’ succeeds in teleporting the past into the present. But it’s not this facet of its finalised form that exclusively appeals. What’s striking is that Liam Howlett – ably assisted by both Keith Flint and Maxim, both of whom were absent on 2004’s too-many-cooks ‘Always Outnumbered, Never Outgunned’ – is setting his sights on the band’s future, channelling the past only when it serves to step the trio onwards and upwards.

This retrogressive progression, if you will, ensures ‘Invaders Must Die’ makes an instantaneous impact; at least it does so if you ever held the group’s seminal second album, 1994’s Mercury-nominated ‘Music For The Jilted Generation’, in high regard. The gear-grinding tension building of the opening title track echoes the atmosphere of ‘Voodoo People’, to the extent where the “Magic people…” vocal is damn near expected when the mood of malevolence is broken by a simple message of returning intent: “We are The Prodigy”. It’s just as effective.

‘Invaders Must Die’ doesn’t fully hits stride until five tracks in – the opening onslaught is a seamless series of skull-pounding numbers, including the single ‘Omen’, but it’s ‘Take Me To The Hospital’ that opens the floodgates for this fifth studio album’s most euphoric highs. Riding in on synth lines that sounded brilliantly cheesy back in ’91, the track features a syncopated Flint repeating the track’s title while around him swarm truly aggressive beats, their bite only tempered by high-pitched vocal snatches more ‘Experience’ than anything else on show here. Indeed, one could place ‘Invaders Must Die’ between its makers’ debut and subsequent high watermark in terms of first-impression style.

‘Warrior’s Dance’ reinforces the ‘Experience’ feel, drifting into focus on ominously buzzing keys before exploding into a day-glo riot of neon colour and mind-altering uppers, a simple vocal line celebrating the simple pleasure of losing oneself on a dancefloor. It’s perfectly balanced – its low end hitting hard while the higher-pitched elements sit pretty atop a solid backbone of thunderous beats and wailing effects. There’s also a slight eastern mood in the breaks – an echo, perhaps, of ‘Narayan’ from album three, 1997’s ‘The Fat Of The Land’.
Rave titans' fifth album fires on all cylinders...

The album’s middle section continues to impress with the savagely boisterous ‘Run With The Wolves’, featuring Flint’s best lyrical performance on this record – the diminutive but well-decorated vocalist rasps “Whatcha gonna do when the hounds are calling?” with every ounce of venom he spat on catalogue classics ‘Firestarter’ and ‘Breathe’. “You’re a mug, that’s why I had to cut you down,” comes his quasi-apology for getting medieval on the arse of an unspecified victim – the man might not look like much to many, but when he’s got his back up like this he’s the last guy you want to bump into down an alley after closing time.

The final return to established archive form comes in the shape of ‘World’s On Fire’, which sees Howlett plunder his past for some truly brilliant retro-rave hysteria – it’s enough to have one lamenting ever growing out of Spliffy jeans and happy hardcore tape packs. But that’s not where the excitement ends, for the completely side-blinding closer ‘Stand Up’ makes clear The Prodigy’s keenness for creative expansion, as they seek to explore musical territories previously considered too alien for a group spawned from a very sound-specific scene.

The track sounds for all the world like something David Holmes would piece together for a jaunty crime caper soundtrack; or, perhaps closer given their acid house leanings, like Primal Scream giving Bobby G the night off and jamming out some silkily bass-heavy funk. That it’s completely out of keeping with everything that’s come before it is both a plus and minus – it does nothing for the cohesiveness of a record somewhat uncertain of its place in The Prodigy’s body of work, but at the same time suggests that this is a band with a future that will outlast the dying cries of the rave crowd, ‘nu’ or otherwise.

It’s a really exciting and optimistic way to end a record that largely earns its stripes by slightly sidestepping familiar footsteps, and leaves the listener certain that The Prodigy still matter. Put simply, nobody does The Prodigy like The Prodigy, and it’s a joy to have them back on all cylinders. Pendulum, don’t let the door smack you on the arse on your way out. 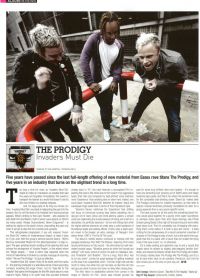