And this is for Brit-pop

Who needs jangly guitairs when you're a "harder-than-Oasis" dance band with a pink-haired mad bloke for a lead singer? The Prodigy certainly don't. Sylvia Patterson samples the even-better-than-Glastonbury live experience...  One word to describe The Prodigy Live Experience? Deafening. Literally. Several persons aged 12 to 25 are bawling their appraisal for the preceding 90 of beat-tension-dance-thrash and no one can hear a bloody thing that anyone else is saying. It may be winter outside - minus 20 in bastard-hard Livingston, Scotland - but in our ears it's Niagara Falls, Canada in spring as a collective bloodstream whooshes in PA-pummlled defeat.

We have witnessed, as one punter put it, "the kind of thing that makes you think 'I'm getting the fuck out of this shit-hole'" The kind of thing, then, that changes lives... Five years ago The Prodigy released the 987 bpm rave classic Charly, and instantly became the titans of comedy tots' techno. Today "rave" is a word used only by TV newsreaders in association with ecstasy and dead teenagers and The Prodigy are hailed as The Greatest Rock'n'Roll Band In The World. It was the live set entitled The Greatest Show On Earth that did it and Glastonbury 95 that rumbled them. As the crowds staggered away from Oasis' lumbering headline appearance they sought the NME stage alternative : The Prodigy. It was everything Oasis wasn't : a spectacle. Keith Flint, scariest man in noise dementia since that bloke from Killing Joke used to stand on his organ and pretent to be the devil, was anointed the irrefutable King Of Rock'n'Roll and the one-time insular festival/dance circuits were forced to offer up their favourite sons as All Of The Peoples Heroes. Tonight, on stage in Livingston, in the first PBP (post-Brit-pop™), no one is up there plalaying dated music in a parka zipped up to the bristling eyebrows. Everyone up there is gurning gleefully at the past that's become our present, hurtling straight through the nostalgia barrier and into the future proper. Already, The Prodigy look like the first men of the new millennium.

"Ah-gat-the-poiznnnn, ah-gat-the-remedeeee !!"
"There's nothing pop about The Prodigy whatsoever. We might be... popular...
but that's a total accident - we didn't go out there looking for it"
- mad Keith

Livingston is cuffed off its axis to Poison as Liam Howlett, technological tune whizz, guffaws behind his bank of glittering decks, rapper MC Maxim stalks off the stage, neon-blue-and-yellow Devil's Cat's contact lenses ablaze, while Leeroy, six foot six, and Keith - adorned in a silver and black shredded shirt-and-jacket number, twirling and leering like some speed-fried drag queen straight off the limo from Saturn - both shreik yelps of "Hey !" "Yaaargh !" and "Oh my Gaaaaad !".  And Keith has his first attempt at lyrical "singing" in the metal-fierce hip-hop pound of superb new Firestarter. The huge, transparent atlasphere which once hosted Keith's entrance has, sadly, had it's day, but you don't need gimmicks when you've got more lunatic stage-diving tomfoolery on display than the collective personnel of Billy Smart's Circus on a headful of hallucinogenics.

One word to describe the bar staff of the Hilton Hotel bar ? Nervous. Very. Like most visually-terrifying people, of course, The Prodigy are harm-free children you could entrust with new-born pups. Put your hands in the air (like you just don't care) for... Maxim ! Aka Keeti, rapper, one-time reggae-toaster, believer in ghosts (who's seen loads to prove it), currently whistling into one of those "novelty" miked-up pint glasses causing endless public feedback rumpus. Leeroy ! Tallest man in pop, dancer, electrician, old chum of Keith's, currently going on about how much he hated Christmas: "You have to change you life for it, don't you? Just for some geezer in a red suit. 'I don't care who you are you fat bastard, get your reindeer off me roof!'" Keith! Dancer, rapper, ex-traveller, parachuting enthusiast, nose and tongue-bolted/purple-and-green-hairedicon immortalised on at least on fan's back in tattoo  form. He once stage-dived right out of his trousers, boxers included, and surfed on the heads of the crowd who tried to "grab his lunch," talks like Jools Holland and looks like Vyvian off The Young Ones. Is currently impersonating a Rottweiler while wresting your repoerter's white fluffy coat to the ground.

Liam ! Teenage musical "prodigy" (hence the band's moniker), player of the piano since six years old, lover of hip-hop at 14, sports car collector and currently the essence of wide-open, huge-grinned charm, he met Keith while DJing at a beach party in the summer of 1990. The band all posses a of wide-open, huge-grinned charm, in actual fact, and they are all exceptionally good-looking despite their attempts to make you believe otherwise. And they are, frankly, hopeless at explaining their own staggeringly successful phenomenon without resorting to rock'n'roll cliché-dom. To wit: "The press just build you up to tear you down. " "I don't write for anyone else except myself. " "We'd love to be able to go and see ourselves. " "You'll never ever be able to manufacture what we've got. " "We're not into categorisation, it's just Prodigy music. " In other words, they are punk rockers.

So. The Prodigy. The Greatest Show On Earth eh ? "Oh God," weeps Liam, genuinely appalled at the accusation, "I wish people would stop saying that... We're not saying that... " he cringes, "ans we've been doing it for the last five years. We're just out there to rock a crowd and that's all we care about. We're just a hard dance band with rock inspiration, anything that has the energy, know what I mean ? Expectations, man... we don't want to let anybody down. "  "What it is," continues Liam, "is the dance scene always thought 'The Prodigy are ours', and they never gave a fuck who else knew about us. Now things are opening up, and the dance snobbery's going, same with the festivals and their rock snobbery. They never used to want to dance acts, now you've got Tricky, loads of 'em. Even in 1994 we approached Glastonbury and they said we wern't big enough, know what I mean ? Which made us want to say 'Bollocks to 95' Not that we think we're big... "

The Prodigy are incapable that they always knew they were special ("No no no ! Not even that, not at all, we never thought about it, we just did it !", though Keith, thankfully has a theory. "We started off wanting to play at the clubs we used to go to," he sta tes, "but because we've all been in loads of different scenes - I've beenplaying in rock scenes, know what I mean ? - what was much better was playing the places we shouldn't be playing at. And that's what did it. We thought 'fuck it,'got on the bill with Senser, Biohazard, Helmet, Suicidal Tendancies, and the Red Hot Chili Peppers. Barbed wire round the stage, no glo-sticks, no Vicks, people spitting everywhere, brilliant. We went there, rocked it and held our heads up. There's nothing pop about The Prodigy whatsoever. We might be... popular... butthat's a total accident - we didn't go out looking for it. OK, you can't avoid success sometimes, unless you... split up ! But it's about whether you take the piss or not.We could've done tours with Harvey Goldsmith, and he's involved with Smash Hits awards so if you do that then you're in Smash Hits. "They were after you for a front cover about a year ago, I believe.Keeti: "Really ? Not having that, man. Really?"Liam: "Well, you'd get a picture of my nuts on the front cover. "

The Prodigy must prepare to "rock the crowd. " In the modest dressing room, littered with crisps and beer cans, Liam takes an unfeasible shine to you reporter's  taste-free flourescent orange shirt and "borrows" it for the show (on is obliged to whip the thing off behind a still-erect Christmas tree in exchange for a purple piped white T-shirt. Which ran after one wash. Cheers). There are no buxon lovelies here waiting to snort cocaine off Keeti's remarkable thighs. Or anything like it (although a superbly "refreshed" woman such as myself). It's the start of a year of touring right around Planet Earth and Keith, for one, cannot wait. "It's ideal for me," he chirps, "I love being surrounded by people. "Keith Flint, ages six-and-a-half, swigs some water and transforms himself into the Liberace of hard man's dance as Liam turns the talk to the good folks of pop heactually admires. Nirvana, Green Day, Skunk Anansie. Björk, Oasis, Phil Collins. Phil Collins? Hello? "I've got a lof of respect for Phil Collins actually," he guffaws. "He doesn't give a fuck, does he? Heheh. But Noel's cool. And he gave me the respect and came up to us at Earl's Court and said 'I like what you do'. "  At the same time, Liam Gallagher said The Prodigy's music "does me head in because it's too hard. " "At least he's honest !" grins Liam. Do you understand why they allow themselves to be popstars? The Prodigy in unison: "Money. " Really? In unison: "Yeah !" Leeroy: "Why else would they approve at ,£12 calendar in Our Price? "So there isn't a 1996 Prodigy topless calendar extravaganza wingin it's way into the shops as we speak? Keith: "Well, I've actually done a hose edition where I do fireman poses in a very tight leather G-string holding the hose in various interesting positions... "Leeroy: "And then there's me in the lycra Spiderman's suit... "Maxim: "And the cowboy suit... " Keith: "With the hole in the buttocks... " Liam: "And the long-jump towards the camera naked... "Somewhere in Essex an accountant curses their name as several million guarenteed merchandising nicker evaporates into the ether. And the Prodigy laugh their multi-coloured heads off. 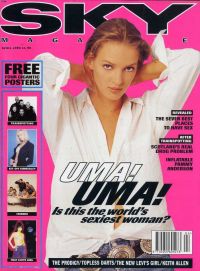 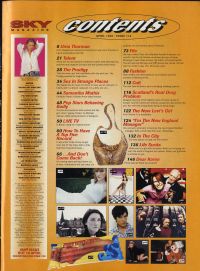 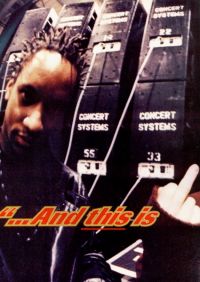 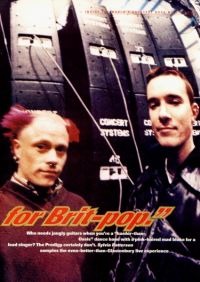 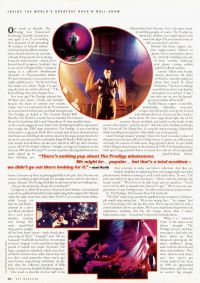